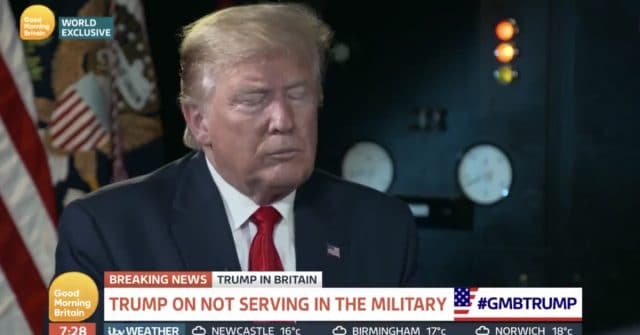 Donald Trump has attempted to defend his ban on transgender people serving in the US military.

The US president was questioned over his policy an interview with Good Morning Britain on Wednesday (June 5) while on a state visit to the UK.

“They have to, after the operation, they have no choice, they have to. You would actually have to break rules and regulations in order to have that.”

Pressed on why he was enacting an anti-transgender policy while claiming to support LGBT+ rights, the president responded: “It is what it is. Look, also people were going in and then asking for the operation, and the operation is $250,000 dollars.

“The recovery period is long, and they have to take large amounts of drugs after that… and you can’t do that. I said, when it came time to make a decision on that, because of the drugs and the cost of the operation.”

<p dir=«ltr» lang=«en» xml:lang=«en»>‘You have to have a standard and you have to stick by that standard.’

The POTUS defends his decision to ban transgender people from serving in the military.@piersmorgan | #GMBTrump pic.twitter.com/heBUjhwiUH

There is no US military regulation that prohibits prescribed hormone treatments or aspirin.

Gender confirmation surgery within the military is rare, and not performed while troops are on active deployment.

Donald Trump struggled to defend the policy in an interview with Good Morning Britain.

When host Piers Morgan pointed out that transgender service people had won medals for bravery, Trump responded: “I’m proud of them, I think it’s great, but you have to have a standard and you have to stick by that standard.

“We have a great military and I want to keep it that way. But you have very strict rules and they blow it out of the water.”

The leader’s claims about surgery and the burden of the cost of treating trans troops contradict the Pentagon’s own evaluation of the issue.

US Department of Defense analysis published in February showed that just 0.0003 percent of the military’s annual budget was going towards surgery for trans troops, with an estimated $2 million expenditure.

Just 17 genital surgery procedures have been performed since 2016, alongside 37 hysterectomies, four breast augmentations and 103 breast reductions.

Former Pentagon official Brad Carson, who served as Under Secretary of Defense for Personnel and Readiness until 2016, told USA Today that the cost is so marginal that it “is dwarfed by the treatment cost of virtually any ache and pain you can think of.”

In September, a book alleged that Trump fumed at transgender soldiers getting “clipped” after a briefing on the issue, before announcing the ban on Twitter.