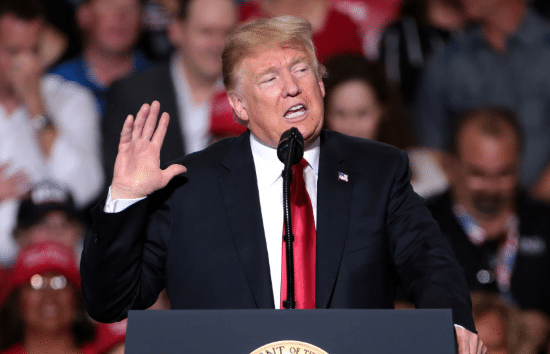 It stems from the recent execution in Iran, a US foe

Donald Trump and his administration are launching a global campaign to decriminalize homosexuality in countries across the world where being gay is still a crime.

NBC News reported the campaign is starting Tuesday evening (19 February) in Berlin. US Ambassador to Germany Richard Grenell, the highest-profile openly gay person in the Trump administration, is at the forefront.

Reportedly, the US Embassy is flying in LGBTI activists across Europe for a dinner and strategy plan.

The efforts will focus on countries in the Middle East, Africa and the Caribbean.

‘It is concerning that, in the 21st century, some 70 countries continue to have laws that criminalize LGBTI status or conduct,’ one US official said.

Recently, countries like Trinidad and Tobago and India overturned laws making homosexuality and gay sex illegal. With India’s massive ruling last year, the amount of people living in places where homosexuality is illegal dropped from 42% to 24%.

The administration’s motivation in launching this campaign was reportedly the public hanging of a man on charges of homosexuality in Iran.

Iran is one of the United States’ biggest political foes.

More recently, a 19-year-old Iranian is fighting for asylum in Sweden. He fears he’ll be executed in his home country for being both gay and Christian.

‘This is not the first time the Iranian regime has put a gay man to death with the usual outrageous claims of prostitution, kidnapping, or even pedophilia. And it sadly won’t be the last time,’ Grenell wrote.

‘Barbaric public executions are all too common in a country where consensual homosexual relationships are criminalized and punishable by flogging and death.’

This also, however, puts some US allies, like Saudia Arabia, whom Trump has defended, at odds with the US. Homosexuality is punishable by death in Saudia Arabia.

Like Trump’s announcement of ending new HIV transmissions during his State of the Union address, LGBTI activists and organizations are skeptical of this new campaign.

GLAAD, for example, tweeted the campaign means nothing with ‘0ver 90’ attacks on LGBTI people from the Trump administration.

We’d believe that the Trump administration will work to protect LGBTQ people around the world if they had not attacked LGBTQ people in the U.S. over 90 times since taking office: https://t.co/3xlb2GI4zQ https://t.co/moNa7mG8TJ

The Human Rights Campaign also tweeted out a thread highlighting the Trump administration’s lack of protections for LGBTI people both at home and abroad (such as in Chechnya).

1/ The Trump-Pence administration has consistently worked to undermine the fundamental equality of LGBTQ people and our families from day one. https://t.co/fKD7FTOqgM

Jeremy Kadden, HRC Senior International Policy Advocate, added: ‘Donald Trump and Mike Pence have turned a blind eye to a campaign of violence and murder targeting LGBTQ people in Chechnya that has stretched on for two years. They have turned away LGBTQ people fleeing violence and persecution and sent them back to countries that criminalize them, and have consistently worked to undermine the fundamental equality of LGBTQ people and our families here at home from day one.

‘If this commitment is real, we have a lot of questions about their intentions and commitments, and are eager to see what proof and action will follow.’

While I support global LGBT-decriminalization efforts, this Administration cannot claim to tackle homophobia abroad while attacking the rights of #LGBT Americans here at home. https://t.co/SACTxBvR2B

Among the actions the Trump administration has taken is banning transgender people from the military, supporting adoption agencies from denying same-sex couples, jeopardizing the safety of LGBTI immigrants, and more.