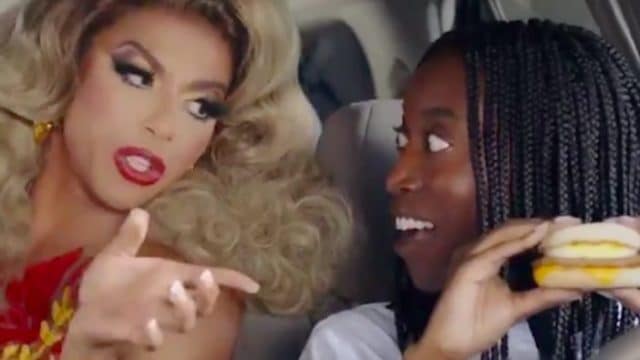 While RuPaul’s Drag Race just crowned its season 11 winner as America’s Next Drag Superstar, one of the show’s most accomplished queens, Shangela, recently popped up in a funny commercial for McDonald’s breakfast items. It’s the latest example of how drag has turned from a queer fringe art form to an increasingly mainstream form of entertainment.

Shangela — who has competed in four installments of RuPaul’s Drag Race but just narrowly missed the crown — walks into the commercial clad in a bright red and yellow dress, contrasting with subdued colors of settings where sleepy-eyed people unhappily slurp cereal, cover themselves in crumbs and fight with a vending machine just to eat breakfast.

After pointing out McDonald’s breakfast items, Shangela hilariously throws a little shade at a coffee drinker she calls “Dana.” The woman corrects Shangela by saying, “My name’s Rachel.” And Shangela responds, “You’re an extra, baby. It doesn’t matter.”

Honey, mornings can be a drag, believe me! #ad That’s why I start my day off with some @McDonalds breakfast! Fuel your fierceness today and tweet #YaaasBreakfast + #Sweepstakes for a chance to win a Morning Eggsentials Kit! Hurry, it’s only for today. https://t.co/snc5WxyEPD pic.twitter.com/ewy67nqSrK

The dining website TheTakeout.com helpfully points out that “Shangela isn’t the first ‘Ru Girl’ to shill for a big company,” and adds:

“Starbucks ran a commercial a couple years back featuring Bianca Del Rio (winner of season 6) and Adore Delano (a runner-up that season); Orbitz has done several; and Shangela and a few other notable Drag Race queens (including one of my favorites, Manila Luzon) also did [an] anti-smoking ad for the CDC…”

The performers from RuPaul’s Drag Race are making a definite cultural impact as fans of the popular reality competition increasingly skew towards straight women and young teenagers and their families.

Some former Drag Race competitors, the show’s annual convention (DragCon) and other drag performers have used their platforms to politically engage their fans.