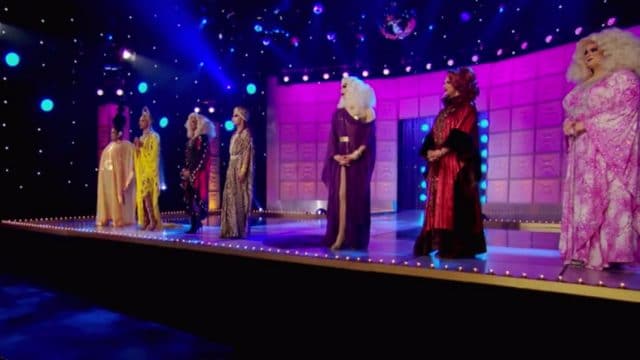 Dragacadabra!
Dragalakazam! It’s another episode specifically designed for a specific Queen
to win. A worrying trend this season.

That said, it’s a
refreshing new kind of challenge for Drag Race. Let’s find out.

After Plastique’s
departure, it’s clear the wheat is now cut from the chaff, and seven queens
remain. Let’s take a looksy at what niche they fit and where they are.

Seems Silky’s
currently leading, and Shuga has nowhere to fit into the competition.

So, it would’ve made a
lot more sense to bring shady goddess Delta Work onto the Reading Challenge and
Morgan McMichaels to feature where there are balls to fling about, yet that’s
not the universe we live in. So, Delta turns up for no reason and the Queens
place balls with the PIt Crew in barrels. Cute. Shawn is back. Very nice.

Vanessa gets to put
the two teams together for today’s challenge, and she picks her friends and
also Yvie. Though Nina seems the obvious choice, as she didn’t want Brooke for
possible distractions.

The Teams must make a
magic show with help from a man in a pineapple shirt because yes, it is 1994.

Team Da Black Magic
have an issue with scripting (Vanessa and Yvie) vs improv (Silky and A’keria).
Team Mighty Tucks just do what Nina says.

The routines are okay,
quick and fun and a little predictable. Some old school jokes from Nina West
with the infinite bottles of booze, a reverse Shangela box joke, Nina’s
shoulders. What really sells it is how tidily done it is even if it’s not
exactly hilarious or revolutionary. But, it’s very clean and well executed.

Things get interesting
with Da Black Magic as a trainwreck of a magic show occurs. Yvie has an
absolutely awful abracada-bra joke. Vanjie is particularly horrendous. Silky
manages to sell something (though with suspicious padding), and A’keria is
okay-ish relatively speaking. But, it’s horrendous overall.

Time for
caftan-tan-tan with you on the runway. No one really sells it tonight. Nina is
in cheap fabric, Shuga has some horrendous reveals, A’keria’s not in a caftan.
The other four are all right, but nothing blows up our billows today. But
that’s okay once in a while. Not much you can do with a caftan without getting
expensive. Honey did it better.

Nina deservingly takes
the win this episode, but in one of the most questionable decisions of all
time, Shuga Cain who by no means performed the worst falls into the bottom
alongside Vanessa Vanjie Mateo (correct). Though every member of Da Black Magic
performed far worse, especially Yvie Oddly. This was a real
wizard-behind-the-curtain moment for Drag Race that left a sour taste in our
mouths..

What’s the point if
you’re going to eliminate people for doing fine while others do worse? It’s
quite frankly bullshit.

Shuga Cain goes home
to Vanessa to a lip sync to No More Drama by Mary J. Blige. Vanjie wins
out and Shuga goes home for no reason.

Frankly, this is just bad storytelling. Shuga didn’t go home for any reason but because the predetermined storylines of the other Queens mattered more, understandably there is an aspect of meddling in reality tv but this is just too far. The hand is too firm on the dials. The producers need to chill.