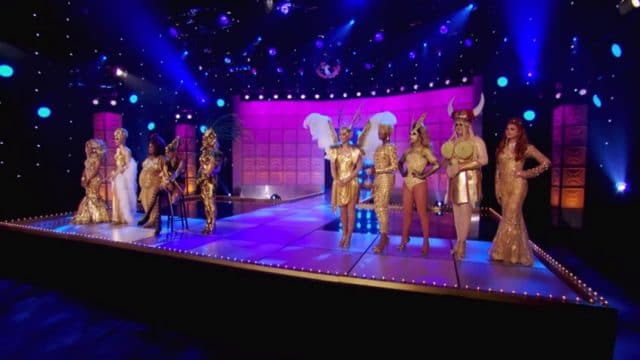 Tonight are the Olympics of Drag (the Draglympics, why not Rulympics? Who knows?).

It’s a high-intensity challenge that we’re surprised passed the safety checks after the Eureka Gymnastics Knee Poppin’ Disaster of season 9.

The strange editing of season 11 continues as half the cast barely gets a look in, but there are some gem moments in this episode with the beautiful Mirai Nagasu, and the awkward and uncomfortable Adam Rippon gets a chance at redemption after the disastrous Season 11 Cast Ruveal.

Let’s shablam our way into it.

With the departure of a girl who got 10 seconds of screentime, Yvie is already telling off another Queen, this time Vanessa Vanjie Mateo and her runways. Vanessa is upset that she’s not meeting expectations and Yvie calls out her repetitive outfits. Yvie isn’t totally wrong since Vanessa’s runways have been lacklustre, but it’s hardly the time for it, and as A’keria puts it, there’s nothing Vanjie can really do about it now.

Yvie seems to belong to the Acid Betty school of not knowing when to say things. It’s hard to watch since Yvie had literally just been hand-delivered a challenge for her to win, only to brutally mess it up, and still get judge praise anyway.

Today’s mini-challenge is a 80s workout video skit with Love Connie (one of John Cantwell’s characters). It’s a fun, no stakes mini challenge and it’s nice to see this set of Queens loosen up a little in their ‘Galisthenics’ routine. There’s no real stand-outs, but Plastique Tiara and A’keria Chael Davenport are team captains for today’s challenge, and get to pick their teams.

It appears nobody wants Scarlet on their team for her infamous inability to dance from the Trump Rusical (though she performed well there). Nina West delivers a shady confessional stressing Scarlet’s in ability to dance. The sad irony that it’s coming from Nina who’s heavily relied on charisma and comedy to avoid dancing.

Choreographer Travis Wall helps out the Queens. There are three things each performer must do: Fanography, Vogue-ography and a Shablam.

Travis is impressed with team one who have natural rhythm. Silky is pointed out to also rely on charisma to sell her lesser ability in dance. Brooke is a bit nervous about fast choreography as she’s used to dainty ballet. Yvie also is struggling today due to her Ehlers-Danols syndrome acting particularly up. She stresses she will get through it.

Silky delivers some TV gold when she warns Travis about the second group.

Silky’s omen turns out to be correct when Nina and Scarlet start to fall behind. Vanjie is given full marks, and Ra’Jah gets unnecessarily harsh comments, but no real substantial feedback despite that. This is clearly the group in trouble.

It’s time for the Draglympics, a choreographed routine to a DJ Shyboy remix. Not one of his best, we feel he’s pressed for time. The themes are apparently Global Warming for Tuckpantistan and World Hunger for Glamazonia which translates to shade jokes for the first team, and feed the children jokes for the second. It’s okay, it’s not that funny. Fart jokes return unfortunately. We support the heavy use of Monica Beverly Hillz soundbites though.

Team Tuckpantistan go first, and A’keria revives life into this rather wonky season and had us shouting in our seats for the first time in a while. Absolutely stunning, moves were perfected and she served absolute face. The best of the night.

Brooke and Shuga are less notable, but serve everything satisfactory and there’s nothing really to read. A pair of safe performances.

Yvie does some impressive flexible moves that really show what she’s capable of, but there are a few sloppy landings, including a particularly nasty painful one that looks like she hurt her ankle. This is later proven to be true where she’s shown with a blue bandage around her ankle. A safe performance with highlights and lowlights.

Silky does well, her choreography is less impressive, but she still does it and sells it. She does an impressive baton routine to make up for it. There’s a hilarious blink-and-you’ll-miss-it moment when the girls are to do leg-ography, but Silky does it with her arms. Whether that counts as cheating, or cleverness is not clear. But, it’s certainly funny. Like Yvie, highlights and lowlights give her a safe.

Team Glamazonia goes second. Their choreography is obviously less complex than the previous team. We assume this is due to the skill level. When there are choreography moments though Plastique Tiara and Vanessa Vanjie Mateo are absolutely amazing and pull everything perfectly. Plastique also serves face, while Vanessa doesn’t quite manage it. High points to both.

Ra’Jah serves all her moves well, but there is a notable slip that takes some points off. Should be safe, but lower by default.

Scarlet is in trouble with some out of step moves, and just isn’t able to keep up. A clear bottom.

Nina West likewise has obvious issues with keeping in time with the others, she sells it with acting and comedy and serving face to make up for it. Unfortunately for Nina, her “sell” is something we’ve seen constantly already where she pulls that extreme frowny face to show she’s being funny, and we just can’t really award for that. Nina also fails to do a shablam of any kind at the end of the performance which everyone else did. It is highly irritating to see a great and wonderful Queen like Nina West get so many free passes. Highly unfair that Nina did not have to do a move specifically required of all other Queens and were a clear part of the challenge criteria.

It’s a golden shower on the runway tonight with the girls in their Glitter & Gold looks. Sadly, no one does the classic Jem and the Holograms look, but we can’t win them all.

A’keria stuns on the night in a gorgeous gown and is far and away the best of the night on the runway.

Shuga and Plastique go for slightly metallic-angel looks which are absolutely gorgeous and fit them beautifully.

Brooke and Scarlet go for classic drag looks, both clean and tidy. Scarlet’s unfortunately appears to be very similar to her Zodiac runway which may lose her some points.

Ra’Jah looks like a fancy church lady and looks beautiful.

Yvie shows up in her classic Yvie style, many separates into a cool conceptual tied-together look. She incorporates her injury with a walking cane that sets it off a treat.

Silky is in… something. It’s just a gold stretch outfit with a Cross on an angle. It’s confusing, nope. Sorry. Next.

Vanessa comes out in another corset, this time with nothing else except a bunny mask and glitter chest. We’ve seen it from Vanessa, perhaps this was from last seasons’ Glitterific runway. She looks clean, but it’s been done more times than you can say Miss Vanjie x 3.

Nina West is appalling tonight and finally allows someone to overcome Cynthia Lee Fontaine’s dreaded Roller Girl runway. Nina West’s Viking look is a cute concept. But, the tacky costume store hat, the giant breasts that aren’t even and have nothing to balance them out, the nasty cheap fabric, the poor mix of textures and gradients of gold. It’s awful, and truly is the worst runway in our opinion of all time. It’s a corset with shit glued on poorly. Camp is not an excuse. Viking looks have been a staple of campy Drag for decades. This was not it. This was last minute children’s dollar store Halloween costume.  Her runway presentation is at least fun.

A’keria is rightfully declared the winner, and her team are all safe. RuPaul calls up the second team all for elimination. Plastique is more or less declared safe, while Vanjie is ripped for her outfit. This leaves the other girls uncertain. Plastique and Vanessa are declared safe. Nina West is too shockingly. Once more her charisma and previous legacy has given her an unfair free pass. This leaves Scarlet Envy and Ra’Jah D. O’Hara in the bottom.

We do not think Ra’Jah deserved it tonight. It seems the producers simply put her in the bottom if they want to save someone else. Truly this should have been Nina vs. Scarlet.

The song is the absolute classic “Last Dance” by Donna Summer. One of the most important tracks for Drag Queens.

Both Scarlet and Ra’Jah serve, Ra’Jah gives pure emotion. Scarlet does too.

Ra’Jah’s dancing is gorgeous and perfect for the song. Scarlet’s perhaps not so much, but she makes up for it by cutting her dress to reveal a disco jumpsuit. It’s not the cleanest reveal, but it’s clever and different and impressive. She also finally pulls off the glitter shower perfectly. Monet X Change attempted one that came out in a big dump, but Scarlet’s here is wonderful.

It’s truly a great lip sync for a great song and worthy of a double shante.

That said, Ra’Jah is declared the winner and Scarlet very gracefully makes her exit.

This elimination has resulted in serious controversy online with a lot of hate towards Miss Ra’Jah O’Hara. We ask any readers to not engage with this vile behaviour. It is not her fault that she was chosen to stay.

Buying Scarlet’s merchandise is a much better way to show your support.

Overall, it’s a much better episode of the season, but we still need to balance out the editing. Shuga, Plastique and A’keria barely get any screentime and we’re already at top 9.