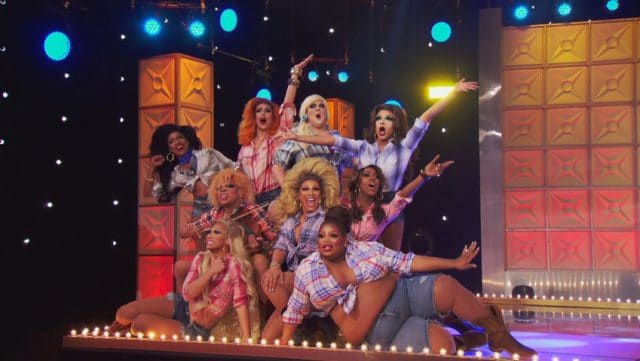 But, tonight the editors completely overcorrect and it’s Plastique’s Hour. The storytelling is out in full effect, highlighting once more this editing issue. Tonight’s episode is perhaps the wonkiest of all time with Plastique Tiara who until now had been performing well, but was ignored in terms of screentime is given nearly the entire episode with production throwing every single storytelling tool they have. Though we don’t fault Plastique in any way for this, and in fact this episode wasn’t awful, but it has serious issues for the enjoyability of the season overall. We just aren’t learning about who this cast is and why we should care. Every single Queen from this cast is interesting off the show, but on the show we’re just getting the same formula with generic dialogue from most Queens, and anything new from Yvie Oddly, Silky Nutmeg Ganache or Vanessa Vanjie Mateo. These three Queens have dominated the screentime to the point it’s kind of overbearing. We enjoy these Queens all individually, but it would not do any harm to have A’keria Chanel Davenport or Shuga Cain get screentime.

With the surprise elimination of Scarlet Envy last week, the Queens return to the work room, Ra’Jah O’Hara hilariously announces they shouldn’t bother giving Scarlet any further screentime and won’t bother to read her message. Ra’Jah reads the Queens in confessionals for sliding: Plastique and her repetitive corsets, and Nina West and her just god awful runways. (Camp is not an excuse for poor execution).

RuPaul announces a mini-challenge where the object is to be in a sack race, with jiggly breasts to make Ru laugh. Silky comes out with a hilarious confessional about giving the viewers her cornbread recipe that will help them gain weight in them tiddies. This is the kind of confessional we should be getting, but it shouldn’t be only Silky.

It’s a silly and fun mini-challenge with no real stakes or real winners, but officially Nina Breasts and Shuga Tits are declared the winners. (Assumingly because their names are either to make jokes out of).

This design challenge is to use organic farm materials to make an outfit, it’s a return to the unusual materials challenges we haven’t seen a new concept since season 7’s “Hello Kitty Ball”. Recent design challenges have been more about themes or remakes of older episodes.

RuPaul spends the walkthrough this episode stirring trouble by asking each Queen who they think should go home. Except Shuga Cain who apparently no longer exists, and doesn’t get a look at all. Except for close ups of her eating the organic produce.

Brooke is told she’s boring and needs to stop that. Silky wants to get rid of Yvie, Yvie wants to get rid of Silky. Ra’Jah is concerned about her construction. RuPaul gets Plastique Tiara’s backstory this episode that her parents do not understand Drag. It’s a sweet moment until RuPaul starts mugging for the emmy by embracing Plastique (compare with season 7 Pearlgate), and declaraing that she is Plastique’s new Mother (despite Alyssa Edwards appearing soon).

Alyssa’s other other Mother appears to guide the girls in how to walk a runway. Why Alyssa? I don’t know. Fanservice and Plastique storybuilding, I suppose. Yvie uses her flexibility to her advantage, and Silky is declared Alyssa’s spirit animal. P

A drama starts up between Plastique and Ra’Jah. It appears Plastique’s mopped Ra’Jah’s bark for her outfit. But, that’s nothing compared to the Untucked in which Plastique also gets a message from her boyfriend. Ra’Jah calls out how much production is giving Plastique this week, quite rightfully and says its unfair. Ra’Jah isn’t wrong per se, but she does take away from Plastique’s moment.

A’keria attempts to use the organic dyes, they don’t work. (I mean…) Unfortunately, this means A’keria loses a huge amount of time for the challenge.

In the dance sketch, the production does a good thing to give Yvie the fiddle to play, so she is still able to contribute to the mini-challenge without having to stress her still injured ankle. The dance itself is not particularly notable and just serves as filler, but that’s normal for these design episodes.

The Runway is miles ahead of the previous two design challenges.

Silky Nutmeg Ganache comes out in a bean-ded outfit and a wheat fascinator which is a similar silhouette to what we’ve seen. It’s well constructive, and effective, but not exactly revolutionary. A solid safe.

A’keria Chanel Davenport comes out in a distressed denim executive realness outfit looking gorgeous. It’s a bit more lowkey and less popping than what A’keria has served previously this season, and as a result it can be seen as a let-down, but another absolute safe. Especially when you consider she made this in half the time.

Vanessa Vanjie Mateo is in some… rope, fabric-wrap-skirt number that is far and away the worst of the week. She had a piece of cardboard with some rope glued to it on her head. It’s poorly made, a weak concept, and just looks unfinished. This is the clear bottom of the week by a mile.

Nina West, oh Nina. Today she looks not-horrible which is an achievable in itself. That said, reality-television watching viewers out there will clock that Nina’s mopped her corn-husk concept from Project Runway season 1. It looks effective, but the editing isn’t there, the silhouette isn’t fixed. She makes no effort to hide the corset so it does really look like the corset-with-shit-glued-to-it which for Queens that aren’t being favoured by production, is usually a sentence to the lip sync for your life. But, that’s forgivable. What’s unforgivable is the dastardly evil purple wig Nina’s put on, and a bizarre stomp-walk down the runway even though they brought in Alyssa to teach them runway, and Yvie’s there with a busted ankle. It’s just a whole lot of no. Bottom. We want to love Nina so much, she is a legend who works so hard for her community, but like Peppermint before her, she’s just not meeting Drag Race’s challenges, and it’s not down to “too high” expectations. Just a bit of a disappointment. Sorry, Columbus.

Shuga Cain is today a wind-swept fairy completed with a wind-swept wig, it’s clean effective and editorial, and really nice. The softer palette compared to the other girls and their earth tones, reds and blues allowed Shuga to really stand out. The construction is lovely, gal. Total high.

Brooke Lynn Hytes is a Grecian goddess trimmed look studded with candied oranges. It’s effective with its smooth colours and lines, but is a little overwhelming, there isn’t a huge amount of construction or design (the trimming appears hot glued and is a bit wonky and uneven), but she looks stunning, it’s a less-is-more look and is somewhere either in the high, or high safe region.

Ra’Jah O’Hara comes in with a bold pant look made out of… get this… BURLAP. Especially as we been knew that those sewing machines are blunter than Laganja Estranja’s medical cabinet. It’s a risky fabric choice, and she pulls it off okay. It’s accessorised well and interesting. However, with the risky burlap, it’s sort of inevitable the seams start coming apart. Overall it’s a great design and executed about as well as it could have been in the time allotted, either a safe or a lower safe.

Yvie Oddly turns out a fiery look in a rather predictable silhouette in a way that doesn’t really scream the “odd” in Yvie Oddly. Nonetheless, it’s well made, stands out on the runway. It’s hard to fault and is deservedly high.

Plastique Tiara is in a corset-with-attachments like she has been in many an episode, however, her editing and styling this episode is beautiful. The headpiece is absolutely stunning, and the nude illusion really helps to change the silhouette. Anyone chalking this up to “just another corset” is deluded. This was the one that ended the others.

Unsurprisingly based on how this episode has gone down with crying moments, mothering moments and growth moments for Plastique. Plastique Tiara scores the win and a prize which is a trip to Toronto. It would have been hilarious had Brooke won this, though questionable a Toronto-based sponsor with Brooke representing them is a bit worrying for conflict of interest reasons.

A’keria Chanel Davenport and Ra’Jah Davenport O’Hara slide into the bottom for something something reasons. It’s probably Ra’Jah’s time to go, but she appears to be exhausted from the Untucked Drama (in which Ra’Jah calls out productions overt favoritism) and sadly she does not give us life in this lip sync (Strut by Sheena Easton).

Ra’Jah is announced to sashay away, increasing the cries of Scarlet Envy’s fans which was probably expected.

For a rather disappointing season, Ra’Jah gave us the old school drama we love, and it’s a shame to see her go as the storyline Queens and also Shuga Cain take over. Though, we’re getting Valentina-All Stars 4 vibes from this episode, we suspect Plastique’s story is now done and won’t last much longer sadly…

Next time we’re onto Snatch Game at Sea!