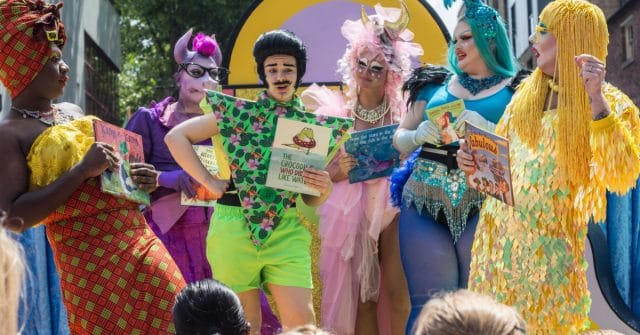 A drag cabaret show for children will be visiting Birmingham as part of its UK tour, where organisers hope it will “challenge the current misinformation and myths that are being spread through protests in the city about the LGBTQ+ community.”

“We wanted to try and recreate the party atmosphere or a drag show but make that suitable for families and children,” Birmingham-based Carver tells PinkNews.

“Each performance is made up of different artists who all turn an LGBT-inclusive children’s story into a number, using lipsync, song, games, and storytelling.

“In many ways, we’re making the show that we wish we could have seen when we were young. It was really important to me to create something that made queer communities visible to children in a way they were accessible and fun but also taught them that it was okay to be different and that differences should be celebrated.”

Alongside national tour dates including an appearance at Hull In Pride, the show will make its way to Birmingham Museum and Art Gallery on June 1, the launch of Pride month.

“We’ve just come from marching at Birmingham Pride with a group of activists, families, and children in support of LGBTQ+ inclusive education and standing in solidarity with LGBTQ+ Muslims and people of colour, so it feels like the perfect time to come back to the city with the show,” Carver said.

FANTABULOSA! incorporates some of the stories featured in the No Outsiders programme, subject of the recent protests at Parkfield Primary School in Birmingham.

Alongside his theatre work, Carver also works with Supporting Education of Equality and Diversity (SEEDS) to advocate for LGBT inclusion.

“The protests have really been taken over by a number of core vocal individuals who aren’t parents at the schools and are pushing an overtly homophobic agenda, but that doesn’t represent the whole Muslim community,” he tells PinkNews.

“For the most part, there are a lot of parents who are concerned, in part because they are being lied to about what these classes include and their fear is being used to stoke prejudice. There are so many commonalities in the experiences of the LGBT community and Muslim communities in the city – homophobic, transphobic, and Islamophobic hate crime have risen dramatically in the city in the last few years.

“I want us to come together and fight our collective oppression rather than be pitted against each other.

“Ultimately there will be LGBT children at those schools and they are my primary concern, we can only imagine how damaging this process has been to them.”

The drag show for kids aims to ‘educate and enlighten’ audiences. (Emwa Jones)

The extravagant storytelling cabaret show features some of the UK’s most exciting drag and performance artists of all gender identities, ethnicities and backgrounds as they spread a message of self-acceptance and inclusivity.

Donna Trump, a school teacher by day and drag queen by night, will appear in the show as a ‘sassy dragon’ and says the show is all about embracing differences.

“As a high school teacher, I believe it’s important for young people, families and even adults to be aware of the world around them,” they tell PinkNews.

“What the organisers gave us was the opportunity to hone our individual talents and skills and create performance pieces that will educate, enlighten and evoke a sense of pride in who the audience wants to be.

“People should come to see the show as it will help you and your family become a closer unit. It will help embrace your differences, stand firm with your individuality and give you the realisation of where you belong in the big wide world.”