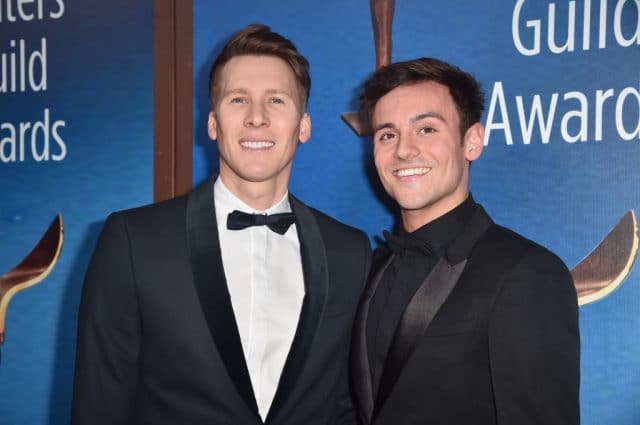 Dustin Lance Black, husband of Tom Daley, has hit out at British Swimming and said a statement released by the organisation yesterday about their ongoing dispute is “PR spin.”

Black revealed on Twitter over the weekend and yesterday details of a spat between himself and British Swimming. The row started at the weekend at the London Aquatic Centre where Black attended with his son Robbie to watch his husband, Tom Daley, diving.

However, Black posted a series of tweets in which he called British Swimming organisers “cruel” and “thoughtless” and said they had created a situation that was “neither safe not welcoming” for them.

British Swimming subsequently released a statement in which they claimed that the dispute had occurred when Black was told he was not allowed to bring Robbie’s buggy onto the spectator concourse.

However, Black has since posted a number of additional tweets in which he said that the situation had “little to nothing to do with a pram.”

“I never asked to bring one in,”Black wrote, “and we certainly had no interest in being poolside with one.

“Anyone there plainly saw that our son was on my lap. This pram story is a lie British Swimming is telling.”

He posted another tweet today (May 21) which said: “So, so silly. Again: *I NEVER ASKED TO BRING A PRAM INTO ANY EVENT* This is a whopper of a misrepresentation being peddled by a scared, lying @jackrbuckner & @britishswimming’s PR team to try to cover up far deeper trespasses. Please don’t fall for it.”

Black also said that he had “withheld the ugliest details” of the disagreement because he had agreed to fix it in private with the organisation—but said they had since broken their side of the promise.

“If you’re reading about prams, that is his PR spin,” Black said of the British Swimming CEO Jack Buckner.

Black has also revealed some additional details of the row in an interview with The Times.

He said that he was initially told that he could not bring the buggy in over security concerns. They were later allowed in, but he claimed a British Swimming official approached him while they were watching Daley dive and “threatened” to kick him out.

Black said an official told him that other people were complaining that they had a buggy. He then claimed that he took Robbie out of the buggy and put him on the floor instead.

“Tom won gold, we were all happy and agreed to meet him,” Black said. “He turned up looking upset and said that a woman was thinking of throwing me out for causing a scene. She accused me of swearing. I didn’t. They told Tom as soon as he was off the podium.”

Black hit out at the organisation for approaching Daley while he was in the middle of a competition, and said the same representative later refused to speak to him.

The argument led Black to stay away from the event for the rest of the weekend.

In a statement issued by British Swimming to PinkNews yesterday (May 20), the organisation said it was “extremely disappointed” that Black felt that he couldn’t be at the diving event.

“The London Aquatic Centre’s policy is not to allow buggies onto the spectator concourse for health and safety reasons and British Swimming supported this policy to ensure the safety of everyone attending this exciting event.

“British Swimming recognises the fundamental part that families play in supporting all of the athletes and offered to put measures in place to store the buggy during the event so that Tom’s family could be present.

“We were pleased to see some of Tom’s family there last night celebrating his success,” the statement concluded.

PinkNews has reached out to British Swimming for comment but no response had been received at the time of publishing. Attempts were also made to contact Dustin Lance Black through his publicist.