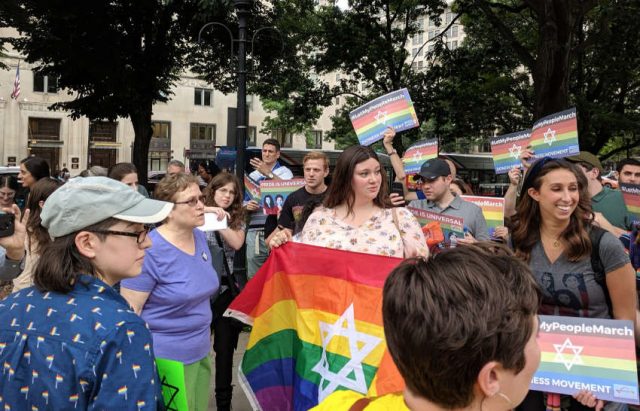 The organizers of Washington DC’s Dyke March have denied accusations of antisemitism after prohibiting the use of Zionist or Israeli imagery.

The lesbian visibility march organizers said said that Zionist or Israeli imagery could be threatening to some, such as pro-Palestinian groups.

Banned symbols include the Star of David centered on a flag, such as in the Israeli national flag.

The decision to ban Israeli and Zionist imagery has been condemned by a number of Jewish groups.

A video appearing to show an argument between the two groups has been posted online.

In a comment piece for the Washington Blade, Dyke March organizers Yael Horowitz and Rae Gaines, said that the decision to ban Zionist or Israeli imagery was part of a wider policy to prohibit nationalistic images.

The two organizers, who describe themselves as ‘Jewish Dykes and Dyke-ish Jews’, stated that ‘[imagery of] violent nationalism does not fit with our vision of queer liberation’.

Horowitz and Gaines also stated that the Star of David has only become widely synonymous with Judaism after being chosen as the symbol for the First Zionist Congress in the late 19th century.

They said that the march was welcoming to Jewish people, and other forms of Jewish iconography was encouraged.

‘We welcome yarmulkes, tallitot, rainbow pomegranates, Lions of Judah, Hamsas, chai, a menorah and anything that doesn’t directly replicate nationalist images and symbols,’ they wrote.

The oragizers also said that Palestinian flags or pro-Palestinian imagery were permitted at the march.

The Dyke March has been widely criticized since announcing the ban earlier this week.

Following the announcement, a loose coalition of Jewish groups spoke out against the decision as antisemitic.

‘The DC Dyke March should know better than to stoke the flames of division and pain by driving a wedge between Queer Arabs and Jews at a time we must stand united against homo- and transphobia, anti-Semitism, and Islamophobia,’ the groups said in a statement according to the Jewish Journal.

‘We hope that they will do better — for the sake and advancement of all of our communities,’ the Jewish Journal reports.

The American Jewish Committee tweeted: ‘How is the @dcdykemarch inclusive when it excludes Israeli or Jewish Pride flags? By banning the Jewish star from their event, they are sending a divisive message to members of the LGBTQ community.’

The decision to ban Zionist and Israeli imagery has also been highly divisive on social media.

In contrast, Sophie Ellman-Golan, the Director of Communications and Digital Outreach at Women’s March, tweeted: I am genuinely curious. I actually understand not wanting Israeli flags (or USA flags!) at Dyke March events because of the association with state repression and state violence that queer liberation movements have always stood against. But the Magen David is JEWISH, not Israeli.

Dyke Marches in the US have faced accusations of antisemitism in the past.

Organizers initially said the women were asked to leave the march as the flags could be a threat to other attendees.

However, they later said they were expelled from the march for being pro-Israel activists, and their ‘Zionist stance and support for Israel’.

The following year, . The groups cited concerns over their safety and of being alienated.