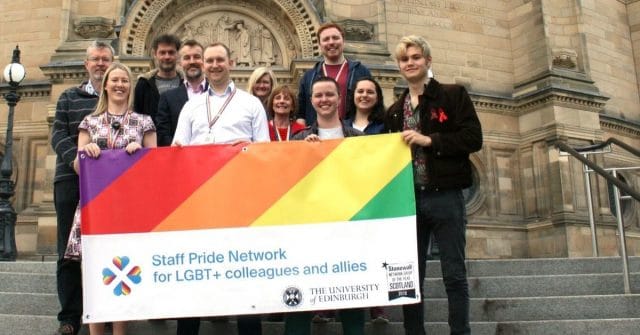 Edinburgh University’s entire LGBT Network Committee has resigned after a row over a talk by anti-trans feminist Julie Bindel.

Despite the committee’s repeated protests, the event, “Women’s Sex-Based Rights,” was held on campus on Wednesday (June 7).

The committee is accusing the university of censorship after they were allegedly threatened with losing their mailing list privileges if they spoke out about the event — preventing them from contacting their 500 members.

“In short, we were told that the Network Committee must support the University or be quiet,” the committee wrote in a resignation letter to its members which has been seen by PinkNews.

“We were also told that, in future, should the Committee wish to take a stance on anything for our Members, that we must first ask permission of the University. Finally, we were told that our mailing list privileges were just that and could be removed if we were not willing to comply.

“We cannot, and will not do that. We must be able to advocate for our membership, especially when one Group appears to be targeted. The University have failed to engage with us.”

In response to the planned event, the University’s LGBT staff network and students launched a petition calling for it to be cancelled on the grounds that it would put transgender and non-binary people “at risk of physical and psychological harm” and “contravene the University’s own policies on equality and diversity.”

Bindel’s views have long been criticised and she and has been no-platformed by several student unions, including the University of Manchester in 2015.

Writing in the Guardian, Bindel has called transgender people “gender benders,” said that “sex-change surgery is the modern equivalent of aversion therapy for homosexuals,” and described gender confirmation surgery as an “unnecessary mutilation.”

An Edinburgh University spokesperson said: “The University places great importance in the Staff Pride Network and its valuable job in representing the University’s LGBT+ community. We regret, therefore, that its committee members have felt the need to step down. Senior managers from the University have offered a meeting with them to discuss their concerns.”

But the university chose to go ahead with the event, and the committee complains they did not offer a statement in support of its trans staff and students beforehand.

“There should be no place for the kind of prejudice which talks about a ‘Trans Taliban’ & trans women as ‘men in a dress’ as Julie Bindel has done.”

After the event there was an alleged altercation between Julie Bindel and a trans person, but details of the incident are as yet unconfirmed.