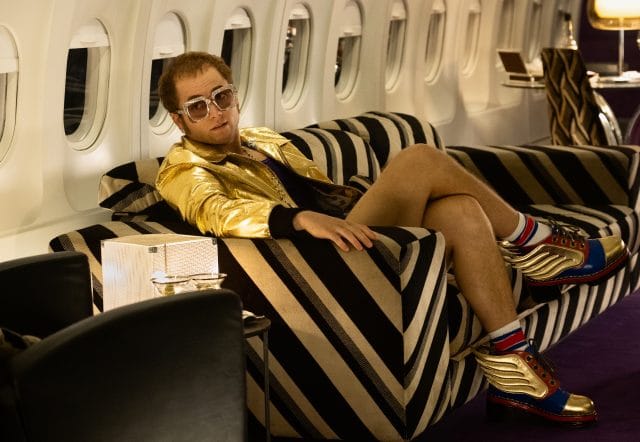 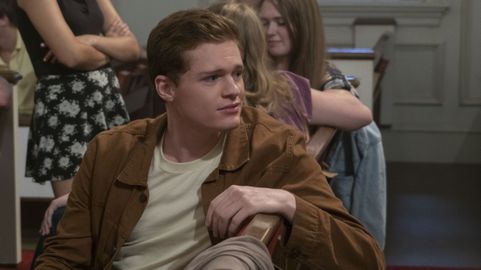 Sean Berdy in ‘The Society’

The Step Out: Rocketman

At long bloody last, the wait is over. The much anticipated Elton John musical biopic finally hits the big screen. Director Dexter Fletcher gives the life and music of Elton the full-on musical treatment complete with production numbers, drama realized through song and some wild visuals (the title number takes place underwater). Even better, the film treats Elton’s sexuality (Egerton’s bare behind has a cameo) with maturity. Taron Egerton and Jamie Bell give fine performances as Elton and longtime lyricist Bernie Taupin, respectively, though the real star is Elton’s music, reimagined in full show tune glory. Try not to sing along walking out of the cinema.

The Stream: When They See Us

Director Ava DuVernay takes on the case of the Central Park Five in this four-part Netflix series. For the uninitiated, the case of the Central Park Five rocked the headlines back in 1989 after the brutal rape of a jogger in New York City. Amid the hysteria—much of it fanned by a certain real estate media narcissist–police railroaded five African-American youths with the crime. DuVernay presents the motives behind the actions of prosecutors, who likely knew all five were innocent, as well as chronicles the life of the five in prison, and their subsequent quest for truth. Jharrel Jerome (of Moonlight fame) and Niecy Nash (of Reno 911!) both give incredible performances as accused attacker Kory Wise and his mother. John Leguizamo, Felicity Huffman, Vera Farmiga, Joshua Jackson and Isis King round out the cast. In short, When They See Us is powerful. The evidence here is enough to impeach Individual 1.

Out-gay director Patricia Rozema adapts the acclaimed play for the screen, which also stars co-writers Amy Nostbakken & Norah Sadava as the same character, at the same time. Mouthpiece follows the story of a young woman preparing for the funeral of her estranged mother but uses the unusual conceit of having two actresses play the same role as a way of manifesting her inner monologue and emotional conflict. It works, in large part, thanks to the performances of Nostbakken and Sadava, and treats death and grief with humor and sensitivity. An acquired taste, Mouthpiece rewards viewers who can stomach its unusual style with a thoughtful, and unique meditation on death.

Opens in New York May 31 with a theatrical roll-out to follow.

Netflix quietly dropped this new sci-fi thriller last week. It concerns a troupe of high school students who return to their small town after a field trip only to find it abandoned, and every route of escape blocked. Together, they must find a way to survive as food supplies dwindle and hormones begin to rage. The Society features no shortage of impossibly pretty teens in cut-off shirts and showing off plunging necklines; it’s Twilight meets Lord of the Flies, substituting the former’s streak of Mormon moralizing for one of mainline Protestantism. That said, the series does feature at least one queer character, and the central mystery keeps our interest piqued. It’s goofy fun for sure, and never boring.

Noted sex therapist Dr. Ruth Westheimer gets the biopic treatment, thanks to this new documentary debuting on Hulu. We also covered the film back at Sundance, where it gave us a bit of a giddy glow thanks to the good doctor’s tender, adorable personality, and a spotlight on her work destigmatizing the queer community. The film also covers her little-discussed early life as the orphan of the Holocaust, and her tenure as an Israeli sniper (yes, really). Now 92, Dr. Ruth has crafted a wonderful legacy of education and empathy. The film, like its subject, will leave audiences feeling better about themselves and wanting to lead happier lives.

The Classic: To Wong Foo

Just in time for pride month, the cinematic archivists at the Shout! Factory has just released a new, decked-out Blu-Ray of the queer classic To Wong Foo, Thanks for Everything, Julie Numar, featuring an all-new retrospective documentary with actor John Leguizamo, director Beeban Kidron & screenwriter Douglas Carter Beane as well as deleted scenes. The anecdotes in the behind-the-scenes doc make the disc alone worth a watch. That we still love To Wong Foo earns it a place on the Blu-Ray shelf. One of our favorite tidbits: Beane recalls his inspiration for the film—a right-wing scare film called The Gay Agenda which insinuated drag queens were going to invade small-town America. If only!

The Popper: Let Me Out

No, not that kind of popper, though this one also comes in handy for pride. Author/illustrator Omid Razavi gives coming out the Dr. Seuss treatment with this new pop-up book (yes, really) dedicated to coming out of the closet. A drag queen fairy godmother named Maitre D leads a questioning youth on a journey to self-acceptance and authentic life, complete with plenty of pull tabs, pop-ups, and some stunning artwork. Let Me Out is the pop-up book so many of us wish we had as kids: one that gets a giggle and a warm sigh. We can’t wait to see drag queens read it at library story time. 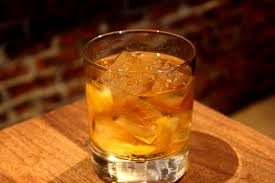 In honor of Rocketman and Elton John, we offer up this sweet and spicy libation named for one of his signature tunes. Just one is enough to get anyone to sing