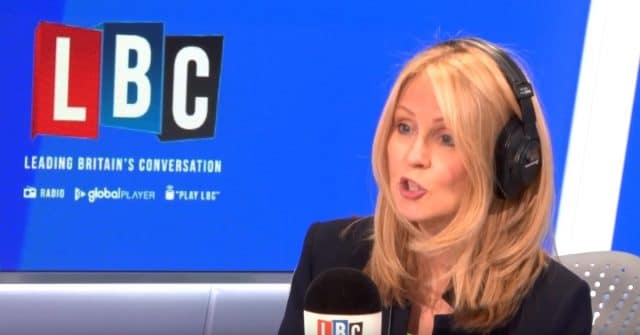 Conservative leadership candidate Esther McVey has said that parents should be able to block their children from learning about same-sex relationships in school until age 16.

McVey, the former Secretary of State for Work and Pensions, was challenged by LBC‘s Nick Ferrari on Wednesday (June 5) after she waded into a row over LGBT-inclusive education to claim parents should have the right to block lessons in primary school.

Asked what age relationships education should become mandatory, McVey replied: “I think, once the person is coming to an adult age, then that is where the state can come in. That would be later, it would be 16.

“Most parents will then think that is relevant as the child gets older, but this was purely about primary school children, and whether parents had the choice.

“If I had a child, I would have my child having those sex and relationship education lessons, but that would be my choice, and I do appreciate other people would have a different choice.”

McVey said her comments “shouldn’t be controversial,” claiming that it was the policy that out former Education Secretary Justine Greening “presided over.”

Greening launched a push to make LGBT-inclusive relationships and sex education mandatory in all schools.

She said: “I’m certainly not, never have been, never will be. Who I was appealing to was parents of children, who I believe know their children better than anybody else.

“It’s their child, they’ve brought this child into the world, and for very young children what is age-appropriate to me should be done by the parents.”

McVey stressed: “I’m happy that LGBT is taught… this question was about what is age appropriate for very young children, and I said it should be parents who have the say on that.”

The row over LGBT-inclusive education has been ongoing since March, with protests outside primary schools in Birmingham demanding an end to primary schools teaching about same-sex relationships.

Appearing on Sky News on May 30, McVey said: “I believe parents know best for their children. Parents need to have the final say on what they want their children to know.

“I’m being very clear, the final say is with the parents. If parents want to take their young children out of certain forms of sex education, relationship education, then that is down to them.”