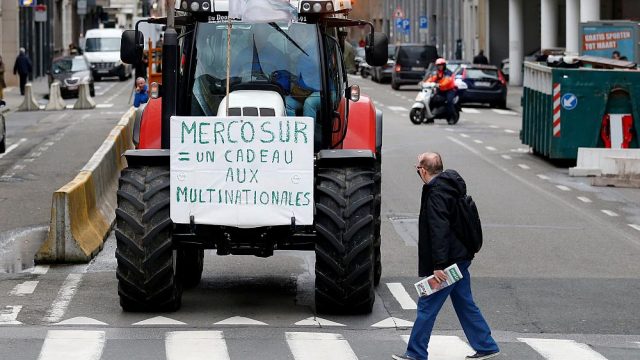 After two decades of negotiations, the EU and South American bloc Mercosur announced they reached a ‘historic’ agreement on a free-trade treaty on Friday.

As world leaders meet at a G20 summit in Japan amid protectionism concerns, EU Trade Commissioner Cecilia Malmstrom told a news conference the deal sent a “loud and clear message” in support of open trade.

But the pact has also drawn sharp criticism from environmental groups and European farmers. It is likely to face challenges as EU countries and the European Parliament still have to give their backing.

What’s in the deal?

For Mercosur, the EU is the first major partner with which it has struck a trade pact, potentially giving EU firms a head start. The European Union is already Mercosur’s biggest trade and investment partner and its second largest for goods trade.

In terms of tariff reduction, it could be the EU’s most lucrative trade deal to date, with some 4 billion euros of duties saved on its exports, four times more than its deal with Japan.

Europe will win sharp tariff reductions on goods such as cars and wine. has its eyes on increasing access for its companies making industrial products.

Meanwhile, Mercosur aims to increase exports of farm products. It will get a new 99,000-tonne quota of beef at a 7.5 per cent tariff, phased in over five years, along with tariff-free 180,000 tonne quotas each of sugar and of poultry.

Brazil’s President Jair Bolsonaro said on Twitter that the deal was historic and one of the most important trade agreements of all time.

Worries from environment groups and farmers

Past deadlines had come and gone, because of EU nerves about a surge of beef imports and Mercosur hesitation about opening up some industrial sectors, such as cars.

France and some other EU countries fear the impact of a sharp rise in beef imports, while environmental groups, whose influence is stronger in the new European Parliament, argue that the agreement could exacerbate deforestation.

The parties said they both committed to implementing the Paris climate change agreement and that a special chapter on sustainable development would cover issues such as forest conservation and labour rights.

EU Agricultural Commissioner Phil Hogan said he recognised the concerns of farmers, including from his country, Ireland, but that free trade agreements struck by the bloc as a whole were opening markets for EU farmers.

Copa-Cogeca, a union representing farmers at EU level, slammed the deal on Twitter.

“The imports of #Mercosur ‘s agricultural goods will de facto establish double standards and unfair competition for some key European production sectors, putting their viability at stake,” the union said.

The two regions launched negotiations exactly 20 years ago and intensified efforts to reach an accord after Donald Trump’s presidential victory prompted the European Union to freeze talks with the United States and look for other global trading allies.