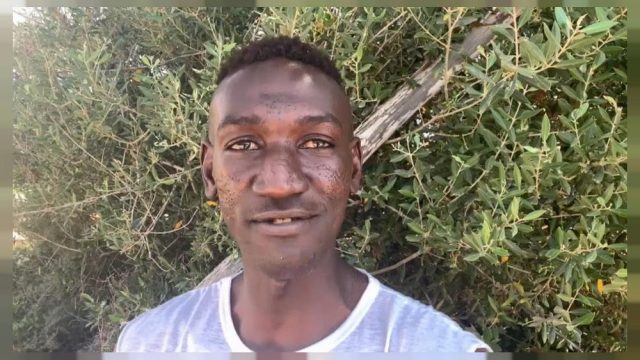 Rescued migrant Khadim Diop, a 24-year-old from Senegal, gave an exclusive interview to Euronews shortly after docking in Lampedusa port aboard charity boat Sea-Watch 3 on Saturday.

The migrant rescue ship is at the centre of a standoff with the Italian government since its captain, Carola Rackete, decided this week to enter Italian waters in order to carry the 40 passengers to safety, after more than two weeks at sea.

Italian police arrested Rackete on Saturday morning as the boat reached the port of Lampedusa.

Speaking to Euronews, Diop expressed his gratitude to the boat captain and described his experiences before he came aboard Sea-Watch 3.

Diop said he left Senegal in October 2017 in the hope of reaching Europe.

‘I was sold as a slave in Lybia’

After crossing Niger in October 2017, traffickers sold him as a slave in the Lybian town of Bani Walid to Libyan criminals, he added. They asked for 5,000 Libyan dinars (€3,158) to release him. He said he was hit and his captors used electric currents on him.

“They hide you in a house, an isolated house. This is where they hide you. They take you to a room with a phone, with electric currents everywhere and tell you: ‘Call your mum and dad and tell them to bring the money,'” Diop said.

The young man said he then reached Tripoli in 2018, where he spent two years.

At some point, he stayed in a detention centre in Tajura, 14km east of the Lybian capital, for 26 days.

“It was bad,” Diop said, recalling his time at the detention centre. “If you haven’t been through it, you can’t know. It’s total suffering. You don’t eat well. We were only fed once every two days. The water was dirty. There were 300 people in just one room.”

Although Diop didn’t get hit himself, he said violence at the detention centre was endemic.

Diop said he attempted to cross to Europe twice, succeeding the second time in June this year, when he was picked up by Sea-Watch 3.

‘The captain never gave up’

The last days onboard were difficult, he said.

“There was no food, only some couscous eventually. Many people got sick, you know, it was not easy.”

“But because of the woman, the captain, we all had the courage. Because she never gave up, she was always brave, she always encouraged us too.”

“All we were afraid of was going back to Libya. She always said: ‘No, do not worry about that, you’re not going back … Inshallah. We say bravo, she is a good person.”

Diop said he now hopes to settle in France, Germany or the Netherlands.

Asked about his opinion on Matteo Salvini, the Italian Interior Minister who has ordered humanitarian ships to stay out, Diop said: “He is right in some ways … Because he says, he always explains that he wants to share. Germany takes its share, France takes its share, the other countries take their share. But we should not leave everything [to one country].”

READ: Why did Sea-Watch 3 decide to enter Italian territorial waters?