Home Gay Life First trans couple in Ecuador to have a baby say they want... 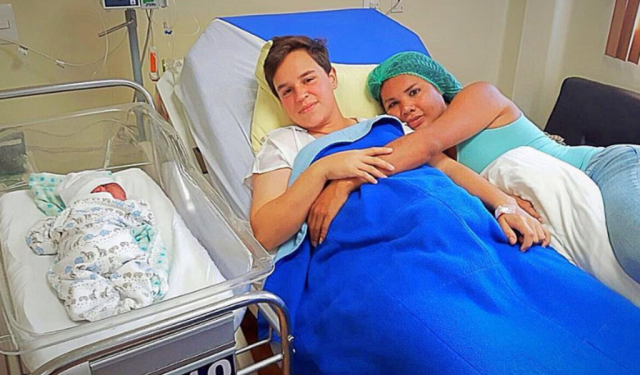 A trans couple from Ecuador who made history when they had their first baby earlier this year have said they want to expand their flock.

Diane Rodriguez – a prominent LGBT-activist – last year shared the exciting news that her boyfriend Fernando Machado was pregnant with their son. Ms Rodriguez and Mr Machado – who have been a couple since 2013 – believed their first pregnancy was the first of its kind in South America.

The couple announced their pregnancy online, and Mr Machado gave birth to their child in June.

“We are the same as other families. Even though we might not have the same rights, we’re the same,” Mr Machado told the BBC, saying they want to expand their growing family even further.

The couple are yet to announce their child’s name, but refer to him as Caraote, or “the snail”.

“We don’t have a name yet – or rather we do – we are just waiting to announce it.”

Of the obstacles to being recognised as female, and thinking she would never be a mother, Ms Rodriguez said: “Being a mother was never something I thought I would do because I am a transsexual… The law before demanded that to be recognised as a woman you had to be castrated.”

Ms Rodriguez first made headlines in her native country in 2013, when she became the he first Ecuadorian trans candidate to run for Congress.

She has previously campaigned for trans rights across South America, after recounting her own struggles after she came out.

The advocate says she was shunned by her family, before being thrown out and forced to live on the streets.

Luckily, the pair have the full support of Mr Machado’s family, as well as the thousands of well-wishers who have congratulated the pair online.

The news follows a recent study that showed trans women in Latin America have a life expectancy of just 35 years old. Research into the Violence Registry revealed that 80% of trans women murdered in Latin America are in their mid-thirties or younger.

Homelessness, poverty and depression lead to many trans women developing drug addictions or being forced into sex work.

The results also found that trans women more likely to end up in prison or as victims of transphobic police brutality.