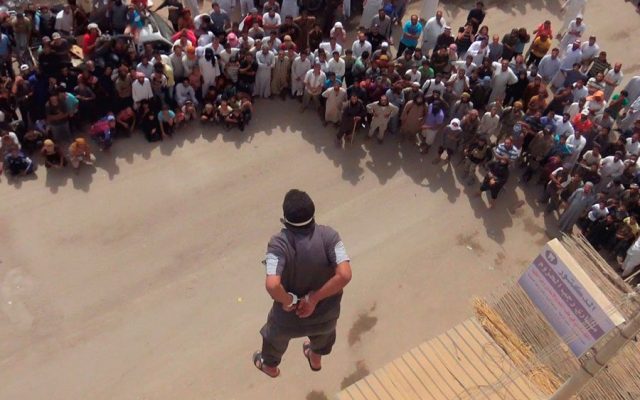 In what’s becoming a horrifying pattern in Mosul — Iraq’s second-largest city and one controlled by the radical Islamist group — the men were pushed off a tall building, falling to their deaths.

Four men accused of homosexuality and sodomy have been executed in Mosul, the northern Iraqi city under ISIS control.

The men were pushed off a shuttered central Mosul office building Saturday, according to a report in Iraqi News, which also noted that two of the men were ISIS members. As is typical in ISIS executions where people are pushed off buildings, crowds gathered at ground level to watch the killings. Another man accused of homosexuality was killed in a similar fashion earlier this month in Mosul. The public executions have become a staple of existence in ISIS-controlled territories, with the first reported executions of men convicted of the “crime” of homosexuality appearing in English press as early as 2014. Similar executions have been performed before a large crowd of locals reportedly gathered at the base of the building to watch the victims die. In some instances, victims who survived the fall were subsequently stoned to death. Still other victims have been beheaded by ISIS members who found them guilty of engaging in “sodomy.”

Last August, the terrorist group allegedly killed nine “gay” men at once, by dropping them from another tall building in Mosul. That same month, the United Nations reported that at least 30 people had been killed in such a manner after being accused of being gay. Mosul, the second-largest city in Iraq, fell under ISIS control in June 2014. By August, ISIS leaders had declared that the city’s universities must segregate all classes by gender, with women attending class in the morning and men taking their classes in the afternoon, according to Education News. ISIS adheres to a radical and, some scholars say, un-Islamic interpretation of the Koran, which mandates the conversion, enslavement, or execution of captured nonbelievers, and the violent subjugation of women, who are the property of their husbands. There is some dissent about whether the antigay provisions of Sharia law are enshrined in broader hard-line Islamic values, or whether the ongoing executions are yet another ISIS perversion of what millions of people say is a peace-loving religion.