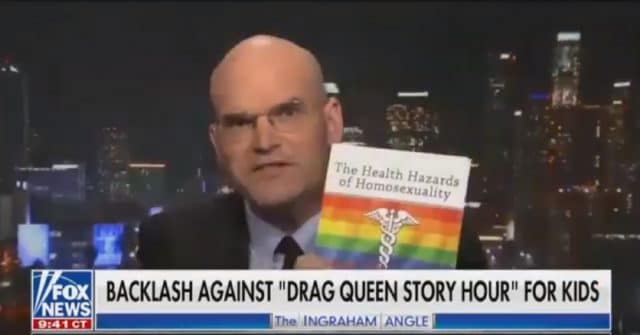 A live Fox News segment descended into chaos after a guest started waving an anti-gay propaganda book and ranting about homosexual “deviancy.”

The incident unfolded on The Ingraham Angle on Thursday (June 13), as anti-LGBT activist Arthur Schaper was invited to discuss a backlash against Drag Queen Story Hour events.

Schaper, who is part of listed anti-LGBT hate group MassResistance, was asked by host Laura Ingraham to explain his group’s “objection to these [drag queen events] that are popping up across the country.”

The pundit claimed: “You have adult homosexual men going in to a public library and reading to children. That alone should be setting off alarms.

Ingraham urged Schaper to remain “focused” of the issue of Drag Queen Story Hour rather than criticising homosexuality, but the guest refused to do so.

He instead responded by holding up an anti-gay propaganda book titled The Health Hazards of Homosexuality, adding: “We’re talking about degenerate, perverse entertainment… here’s a book that people should be reading to understand at length what’s going on with this whole agenda.”

The moment appeared to lead producers to cut off the guest, with Ingraham responding: “Don’t hold up props! Here’s one thing I don’t like on this show, people with props. This is not a segment to promote one particular group.

“We are trying to find out what’s really going on here. People have legitimate concerns on both sides of this issue.

“What is the point of doing this with kids? Is there a point? We wanted to have a really good conversation.”

The book Schaper waved claims: “The sexual revolution and mainstreaming of homosexuality have created a public health crisis affecting us all. But the media give little attention to the danger of gay and lesbian sexual practices and the resulting health problems experienced by the gay-lesbian-bisexual population.

“Worse, the medical authorities deliver mixed messages to those at high risk while failing to protect the broader public.

“Homosexual and bisexual men are most severely affected and are driving the recent increases in STDs. Lesbians, heterosexuals and youth are increasingly at risk by imitating dangerous ‘gay’ practises.”

It is unclear why Schaper was invited onto the segment, given the group’s well-documented record.

MassResistance is designated as a anti-LGBT hate group by extremism watchdog the Southern Poverty Law Center.

The US-based group has previously praised laws in Nigeria criminalising gay sex, claiming that African countries are experiencing a “breakdown” because of the “homosexual movement.”

They wrote: “The government of Nigeria, which has one of the world’s largest populations of AIDS sufferers, is outraged by what they feel is the Western world’s efforts to subvert public morality. They are now taking bold steps to fight back.

“Almost predictably, Great Britain and the United States are threatening to take action against Nigeria for having the nerve to challenge Western political correctness. A strong bill passes the Nigerian legislature.”

In April 2018, it emerged that Ingraham started her reporting career by outing gay college students.