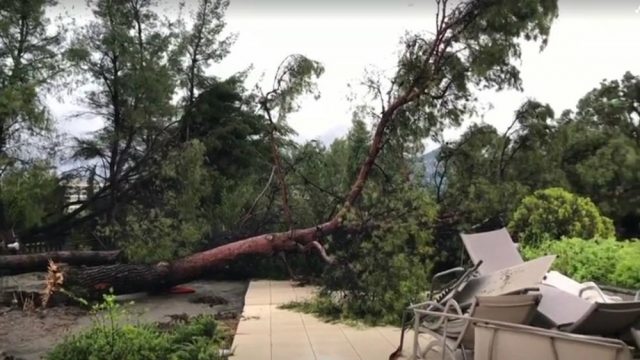 Gale-force winds, torrential rain and hail were reported across parts of northern Greece on Wednesday evening as a freak storm took hold.

The storm, which hit the popular tourist peninsula of Halkidiki, left at least six foreign nationals dead, including two children.

Two Russian nationals, a man and young boy, were also killed after they were caught under a collapsed tree.

Videos captured by local media showed the storm damage, including vehicles crushed by uprooted trees and debris, and roofs that had been ripped off buildings.

Restaurant fronts were also destroyed in the severe weather.

People living on the peninsula described having never experienced a storm like Wednesday night’s events.

One Facebook user, Despina Chitri, said she had lived in Potidaea for three decades, but it was the first time she had seen such “dramatic moments”.

She shared pictures of debris and objects overturned on her balcony, adding: “We do not have light, our houses took in water, hail, rain, lightning, thunder, destruction.”

Athansios Kaltsas, the director of the Nea Moudania Medical Centre, told Greek television that it was “the first time in my 25-year career that I have lived through something like this.”

He added: “It was so abrupt, and so sudden.”

Kaltsas made the comments after treating many of the more than 100 wounded in the storm.

He said his patients ranged from 8 months in age to 70 years old, and some had suffered head injuries from falling objects.

A state of emergency was put in place on the Halkidiki peninsula amid what has been described by meteorologists as “extremely unusual” conditions for the time of year.

Greece’s newly-appointed citizens’ protection minister is due to visit the region on Thursday.