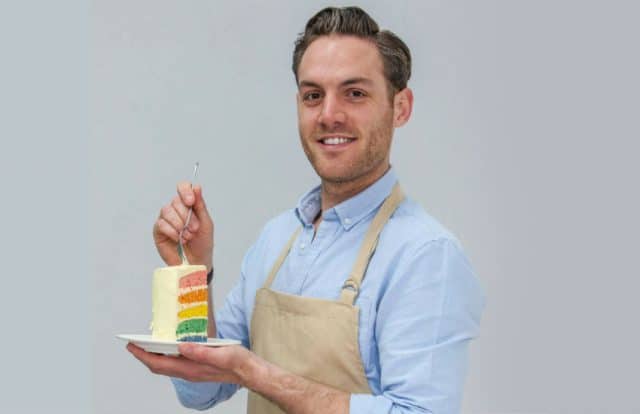 Tom Herthington, 29, is one of the lucky few to star in the new series of The Great British Bake Off.

He works as an architect and lives in Edinburgh with his boyfriend, David.

Tom lost his identical brother Robert in 2013.
He was serving in the army.

25-year-old Robert was killed in Afghanistan after a Taliban explosion hit his armored vehicle.

The explosives were hidden in a tunnel under the road.

‘I can hear Robert pushing me to go harder’

He was only six weeks into his tour.

He said: ‘With every training session I can hear Robert pushing me to go a little faster, a little harder.

‘Completing another marathon will be a testament to the strength I have gained from him and to show the strength he used and showed regularly.’

Tom won’t mention his brother in the show. But, he will talk about his mother.

His show bio states his mother taught him how to bake. A love for baking runs in the family,

She works as a Home Economics teacher, and bother his grandmothers loved making cakes. His sister owns a teashop.
Tom said: ‘My whole family loves baking and my partner had been encouraging me for some time to apply,

‘He thought I would enjoy the experience and I am so glad I did take his advice and apply. Everyone in my family is so chuffed for me that I’ve got to be part of the 12 bakers who are in this year’s tent.’

He first thought about applying for the show after watching back-to-back episodes one day when he was off work ill.

‘I can take things on the chin’

Tom believes he’s ready to face the judges’ critiques of his bakes.

‘Thankfully I am good with taking criticism because as part of my degree course,’

He studied at Edinburgh University.

‘You regularly had to stand up every week and be told what was right or wrong. I can take things on the chin. I am all for criticism. It’s important to learn.’

The Channel 4 show see’s food writer Prue Leith join Paul Hollywood in the tent as judges, instead of Mary Berry.