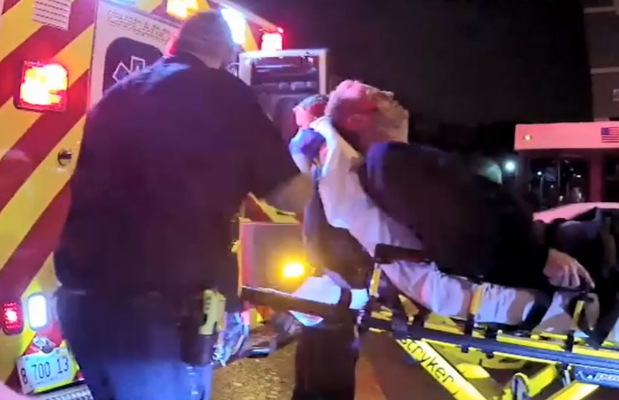 A police officer in Chicago is currently under investigation for allegedly beating a gay couple outside a club.

So far, Elkins faces no official charges. On Wednesday (31 October), however, Anthony Guglielmi, a Chicago police spokesman, described Elkins as a ‘person of interest’.

He also added the investigation is ongoing.

What happened a month ago?

Sherwood suffered a compound leg fracture, while Stacha was admitted to the hospital with broken cheekbones and a perforated trachea.

The night of 29 September, the couple was out with friends. They went to @mosphere, a popular gay dance club, when they reportedly ran into Elkins and his group.

The suit alleges Elkins and his friends attacked Sherwood, Stacha, and their friends first. A friend of Elkins’, however, said Sherwood instigated the alteracation.

Sherwood’s group left the club and then Sherwood said Elkins came out and began attacking them.

‘I went instinctively into the fetal position, and they kept kicking and punching my head,’ he described.

Three other men were named as defendants in the lawsuit, including an Oak Park police officer identified as Elkins’ boyfriend.

‘They protect their own’

Cavanagh said no action has been taken against Elkins because he’s a police officer.

‘They had probable cause to arrest (Elkins) weeks ago. But because it’s a Chicago police sergeant, nothing,’ he said.

At the time of the altercations, Elkins had been on paid desk duty for over three years due to sexual assault allegation in his Michigan hometown.

The Michigan State Police records reveal accusations against Elkins for inappropriately touching four teenage boys in 2015. He pleaded guilty to reduced charges and faced a fine, as well as a year of probation.

Before that, in 2003, he faced charges of sexually abusing a male student during his time as a patrolman. A judge eventually acquitted Elkins and he became sergeant in 2007.

In his 20 years on the force, Elkins also accrued 35 citizen complaints.

GSN reached out to the Chicago Police Department for further comment.