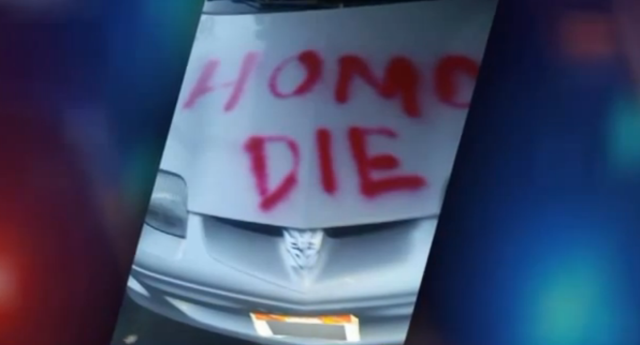 A gay couple in America have had their car vandalised with homophobic slurs.

Aaron and Nik McFarland were targeted with the hateful abuse at their home in Ogden, Utah.

The graffiti, which said “die homo” and “faggot”, has left the McFarland family upset and in disbelief.

Aaron McFarland said: “I seriously laid in bed for a couple of hours because I was just shocked.”

Nik’s mother, Jean Kaye, was distraught over the slurs. She said: “I can’t believe Ogden Utah had someone so hateful.

“It broke my heart because my son was born gay, but he was also born intelligent, smart, loving, kind and good. His sexuality does not take away from any of that. “Hatred is not okay. We were meant to love each other,” she added.

The couple are unsure why they have been targeted with the abuse, but believe it’s related to the outcome of the election.

“It’s been a divisive time for the country, and I don’t care if you voted for Hillary or Trump or Stein or wanted Bernie Sanders, I just think we’re all human beings,” Aaron said.

They have been supported by their Senator, Jim Debakis, who hopes the attack isn’t a sign of an increase in hate crimes.

The couple have filed a police report, but they hope they can bring the people of Utah together to stand against homophobia by telling their story.

“We have to try to get through this, I don’t want to see this state or this country fall back in the years of progress we’ve made,” Aaron explained.

In the process removing the slurs the couple removed some of the original paint. A local auto shop repaired the damage for free after the couple created a GoFundMe page to fund the job.

The McFarlands received donations but have since closed the page and issued refunds. They have urged people to donate to Equality Utah and the Utah Pride Centre.