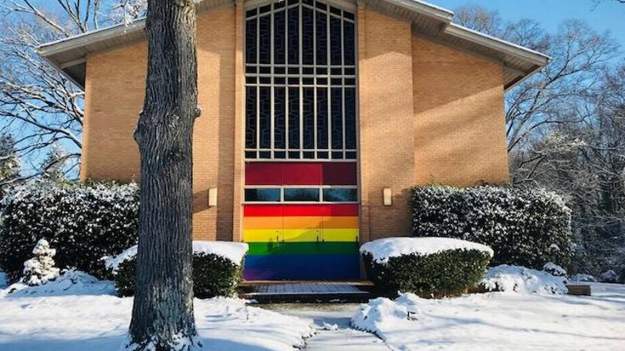 A gay-friendly church in Charlotte, North Carolina has been vandalized, not once but seven times, but its members are staying strong.

Wedgewood Church members woke up to find “F****** are Pedofhiles” (yes, misspelling and all) displayed across their rainbow-colored building early Wednesday.

This was discovered just hours after the Charlotte-Mecklenburg school board voted to protect LGBTQ students.

“It could be related to the school board meeting, but it’s hard to tell since it’s the seventh time we’ve been vandalized,” said Chris Ayers, co-pastor of the church. “We support what the school board did enthusiastically.”

In order to get the church’s front doors back on its feet, a GoFundMe page was created and has already raised more than $6,500.

“While this could be a reason to fear, we choose to stand together stronger than ever, ready to continue to be the welcoming,” says the GoFundMe page. 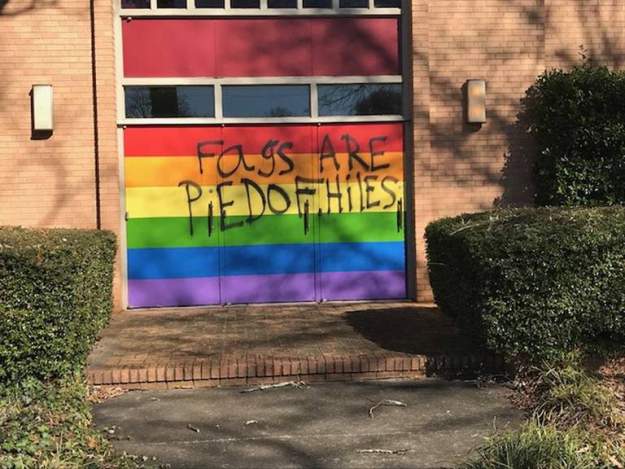 In order to celebrate the multiple LGBTQ members of the 80 or so congregation, the church decided to paint over its front doors years ago. Unfortunately, that has caused a lot of negative attention to come its way.

For instance, people have vandalized the Church’s flagpole and sign. Then, in 2016, someone posted a note on the front doors with a shotgun shell taped to it. Luckily, the culprit later confessed.

“We’ve seen this happen a lot more over the past two years,” Ayers said. “If it’s not related to the school board meeting, then it’s related to the broader education of the homophobic community.”

As for the school ruling, it was deciding over the revision of the district’s multiculturalism policy. The policy will now include sexual orientation and gender identity/expression under its definition of diversity needed to be protected and incorporated into the curriculum.