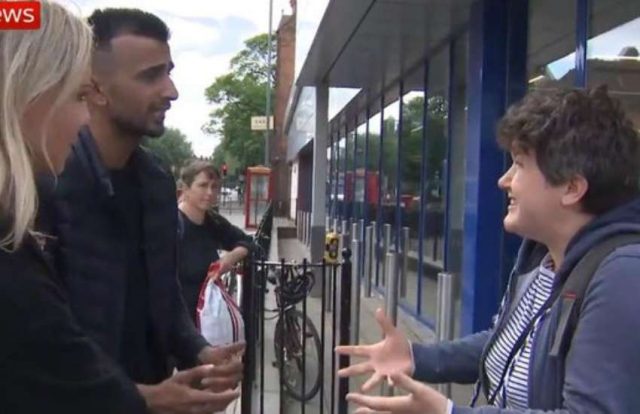 A lesbian mother in Birmingham spoke to anti-LGBTI protesters to tell them there’s nothing wrong with four-year-old children knowing queer people exist.

More than 300 people protested in front of the gates at Anderton Park Primary School over LGBTI-inclusive classes.

Katy Bennett, who has a five-year-old son and comes from a two-mum family, challenged the protest leader on his views yesterday (30 May).

Parents and protest supporters, many from Muslim backgrounds, had pummelled the sidewalk outside the school that day against the diverse curriculum.

While Afsar, who doesn’t have any children attending the school, just a niece and a nephew, found a foe in the form of mother Bennett.

Live on television, Bennett confronted Afsar on the ethics of being anti-LGBTI and how the protest is impacting the children who go to the primary school.

‘I live just around the corner from the school,’ she said. ‘I’m gay. From a two-mum family. I have a five-year-old son.

‘The thing I have problem with is people saying it’s not appropriate for four and five year olds to know that gay people exist.

‘My son is fully aware that there are many, many different types of people and the issue I have is that no human right, no protected characteristic, trumps another characteristic.’

However, Bennett then quizzed Afsar on what specifically about the curriculum he opposes. He name-dropped a few involving LGBTI themes and characters.

In a cool and calm tone, she responded: ‘The book that I’m talking about is a beautiful book that simply shows two parents being a parent to their child, giving their child a bath, taking their child on a walk, playing hide and seek.

‘In what way is that not ok for your child to see that?’

It all started with Andrew Moffat. The assistant headteacher at Parkfield Community School introduced ‘No Outsiders.’ A program of study designed to curb bullying by promoting LGBTI lives.

But from pushing banners outside the school gates to removing their children from lessons altogether, Moffat’s inclusive lessons erupted exclusion from parents.

Protesters argued that primary school children are too young for such material. Or that pro-LGBTI education stands in contrast to Islamic teachings.

The ensuing row made headlines, but regardless of the backlash, LGBTI people and allies have widely praised Moffat for his commitment.