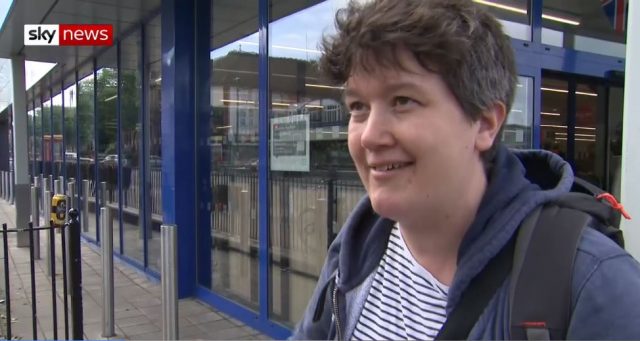 A gay mum has confronted the leader of protests against LGBT+ lessons at Anderton Park Primary School in Birmingham, and said her five-year-old son is aware that “different types of people exist.”

Katy Bennett approached a Sky News reporter and the leader of the protests, Shakeel Afsar, and asked him about the goal of protests against LGBT+ lessons in the school.

Bennett told the news station that she is “gay from a two-mum family” and said they have a five-year old son.

She said: “The thing I have trouble with is people saying it is not appropriate for four/five year olds to know gay people exist.

“My son is fully aware that many different types of people exist. And the issue I have is that no human right, no protected characteristic, should be promoted over another.”

Afsar replied by saying that his community does not want to discriminate against anyone, and continued: “However you choose to bring up your children is your choice and the parents should be allowed that choice.”

When Afsar invited Bennett to join them at the school protest to hear their concerns, she told him that she is “a bit frightened going near the school to be honest.”

Protests at Anderton Park Primary School in Birmingham have been ongoing for weeks over aspects of the curriculum which are inclusive to LGBT+ people.

This week, human rights lawyer Nazir Afzal was brought in to broker peace between parents and school officials over lessons which taught young children about different types of families, including children with same-sex parents.

Afsar appeared on This Morning last week where Phillip Schofield slammed him for“discriminating” against LGBT+ people.

Schofield said: “But aren’t you discriminating against the LGBT community, you’re doing exactly what you’re saying is happening to you?”

“You are discriminating because what you’re doing is, you’re encouraging your children, as parents you will encourage your children to be less tolerant.

“Now eventually those children, because thankfully children are much more inclusive nowadays, that generation will grow up, and they will probably, potentially, possibly, reject your views, and you will widen the gaps between generations.”