Home Gay Life Gay profiles on Hinge are on the up, thanks to Pete Buttigieg... 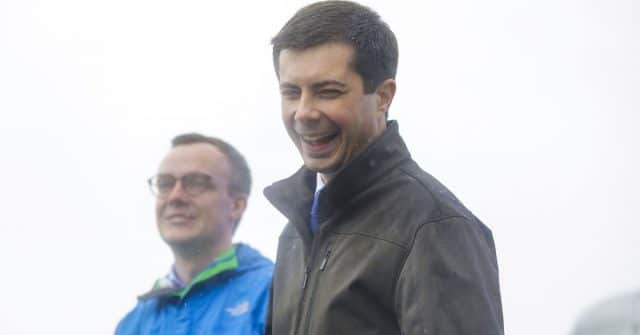 When announcing his 2020 presidential campaign last month, Pete Buttigieg said that he hopes to inspire freedom, security and democracy within US politics. For now though, it looks like he’s inspiring gay men around the world to look for love online.

Since revealing that he met his husband, Chasten Glezman, on Hinge, the number of profiles belonging to gay men has risen by 30% since early April – around the same time that the Democrat became widely known. According to Fortune, Hinge founder and CEO Justin McLeod credits Buttigieg and his partner’s success story for the increasing number of downloads.

“We’re proud of all of the relationships we’ve helped set up — including Mayor Pete and Chasten,” he told the publication. “We’re happy to see that their love story has encouraged even more members of the LGBTQ community to find their person on Hinge.”

Buttigieg, 37, previously told The New York Times that he’d turned to the internet to find a partner because he was looking for something serious. “I wanted a platform where you’re not necessarily inundated with hookup culture and sex,” he explained.

Nicknamed the “relationship app,” Hinge prides itself on being “less superficial than Tinder” and encourages its users to be proactive when they see a profile that they like. As well as uploading obligatory photographs, users must display the answers to three questions of their choosing on their profile. If a particular answer resonates with someone viewing the profile, they can ‘like’ or respond to it, kick-starting a conversation that’s not solely based on appearances.

Having met on the app in 2015, South Bend Mayor Buttigieg and high school teacher Glezman married in June 2018. Speaking about their first date to Now This, Glezman said: “It was actually supposed to be coffee, but I got stuck in rush hour traffic getting out of Chicago. So we moved it to dinner.

“When I pulled up in front of his house to pick him up, he opened the door and we both said ‘howdy’ at the same time. Then we both said, ‘What? That’s my word.’

“It was kind of a cute meet-cute.”

Buttigieg has spoken frequently about LGBTQ issues and being a part of the community since coming out in an op-ed for the South Bend Tribune in 2015. While he recognises the importance of being an out-and-proud politician now, he poignantly wrote in it that he hopes that “when my children are old enough to understand politics, they will be puzzled that someone like me revealing he is gay was ever considered to be newsworthy.

“But the true compass that will have guided us there will be the basic regard and concern that we have for one another as fellow human beings—based not on categories of politics, orientation, background, status or creed, but on our shared knowledge that the greatest thing any of us has to offer is love.”