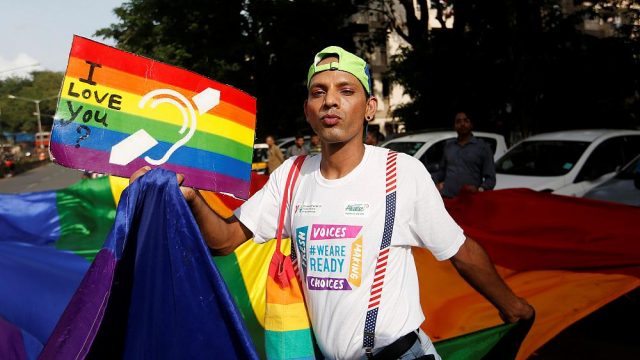 India’s Supreme Court scrapped a colonial-era law that criminalised gay sex on Thursday, ruling discrimination on the basis of sexual orientation as a fundamental violation of rights.

The law against gay sex — also known as “Section 377” — was introduced during British rule more than a century and a half ago. It banned “carnal intercourse against the order of nature with any man, woman or animal” interpreted to refer to gay sex.

The judges said unanimously that the 1861 law was a weapon used to discriminate against India’s gay community.

What does this mean for the gay rights movement in India?

Although the court’s ruling brought about celebrations from activists and organisations working to give more rights to the Indian LGBTQ community, Nidhi Dutt, a freelance correspondent for NBC, told Euronews that in India, a ruling of this kind would likely take some time to “become a reality on the ground.”

“While it’s a huge step in the right direction in terms of the way modern India is looking at this issue, it may be a very long time until we really see that play out in reality and particularly in the conservative corners of India of which there are many places from north to south — and that’s where it’ll be really important how it has been received and what implications it will have,” she said.

Dutt highlighted that the same applied for the ruling’s consequences in other South Asian countries.

“Going back to the idea of how it translates on the ground, that’ll be the real test of this, not just in India but how it carries forward as a trend in the region,” said Dutt.

What has been the reaction to the ruling so far?

“We’ve yet to hear from the leading party — the Bharatiya Janata Party (BJP) — but, by and large, the media has been jubilant, there’s a lot of positivity in the urban centres”, said Dutt, “but again, it’s really about how it shapes down outside the liberal centres (New Delhi, Mumbai, Kolkata).”

“It’s putting things into practice that comes next,” said Dutt. “It’ll be interesting to see how various parts of the communities handle the ruling: will there be awareness drives reminding everyone (gay sex) is legal now and to educate the wider community? Or are people going to quietly go on with their lives in a new era, so to speak?”

“It’s a long road and we’ll have to wait to see what comes next,” Dutt concluded.

According to an index released by advocacy group ILGA-Europe, Armenia, Turkey and Monaco were also among the poorest performers on the index. In the European Union, Latvia was the lowest-scoring country, with a mark of around 16%, followed by Poland (18%) and Lithuania (21%).

Malta topped the board for LGBTI rights, scoring more than 91%, implementing positive steps over the past year, including the legalisation of same-sex marriage in July.