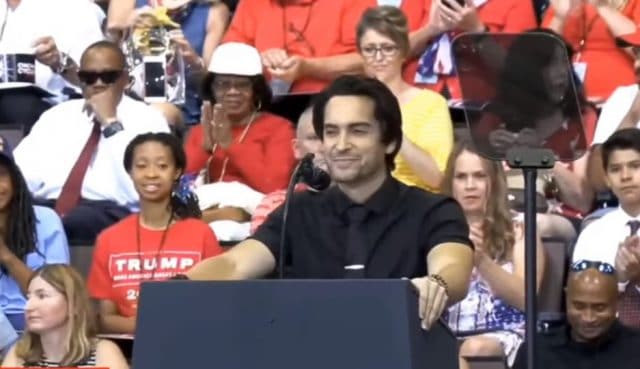 An openly gay Manhattan hairdresser and aspiring actor who leads the group “Walk Away,” recited a QAnon conspiracy theory rallying cry onstage shortly before President Trump addressed the crowd at his rally in Cincinnati on Thursday.

To the casual observer, that last line may seem fairly anodyne, a clunky but earnest way of capturing the sentiment behind “e pluribus unum.” But it is not anodyne. It is, in fact, the main rallying cry of QAnon conspiracy theorists.

QAnon, for those not familiar, is a sweeping conspiracy theory that posits that Trump’s position as president serves primarily as a vehicle for him to carry out a global battle against pedophilia. (It’s an evolution of the late-2016 “Pizzagate” movement that focused on quickly debunked theories about abuse at a D.C. pizza restaurant.) QAnon centers on an anonymous figure called Q, who they say sends sporadic messages to adherents implying that he’s positioned within the White House and that the dam of prosecutions for sex crimes is about to burst. Q’s predictions are offered in the nebulous, hard-to-verify way that you might expect from a carnival fortune teller.

Straka’s use of the slogan came only hours after Yahoo News reported on a leaked FBI intelligence bulletin singling out the QAnon conspiracy theory as a potential domestic terrorist threat.

“The FBI assesses these conspiracy theories very likely will emerge, spread, and evolve in the modern information marketplace, occasionally driving both groups and individual extremists to carry out criminal or violent acts,” the document states.

Straka attempted to distance himself from the QAnon on Friday, telling TPM that he does not support Q and denied that he was referencing the QAnon conspiracy theory.

“I was not making any references to QAnon whatsoever or subtly hinting to that, and obviously I’m disappointed that the media has chosen to focus on this,” Straka told TPM.