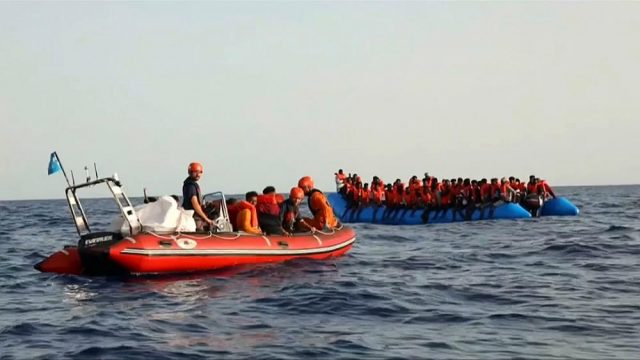 German humanitarian group Sea-Eye has said one of its ships is on its way to the Italian port of Lampedusa with 65 rescued migrants on board.

Sea-Eye said on its Facebook page that the crew of the Alan Kurdi ship brought the African migrants onboard their vessel early Friday. They were found in a large dinghy about 55km off the coast of Libya.

Libyan authorities failed to respond to communication for more than three hours, the NGO said,

The Alan Kurdi is a German-flagged vessel named after the three-year-old Syrian refugee Aylan Kurdi who drowned in the Mediterranean and whose body washed up on a beach in Turkey in 2015.

The captain of another rescue ship, the Sea-Watch 3, forced her way into the Italian port of Lampedusa last week in defiance of Italy’s interior minister Matteo Salvini.

The Sea-Eye was headed for Lampedusa on Saturday — and possibly for another stand-off with the Italian government.

“We are now on our way to Lampedusa. We do not get intimidated by an interior minister, but we are heading to the next safe port,” the NGO said on Facebook.

“The law of the sea applies, even if some government representatives do not want to admit this.”

The vessel has already been warned off from going to Italy by Interior Minister Matteo Salvini.

“The situation is under control, but prevention is better than cure. And this applies on land as at sea given that since last night I have to take some time to deal with another capricious NGO that last week didn’t want to go to Tunisia and today doesn’t want to go to Malta,” Salvini said on Friday.