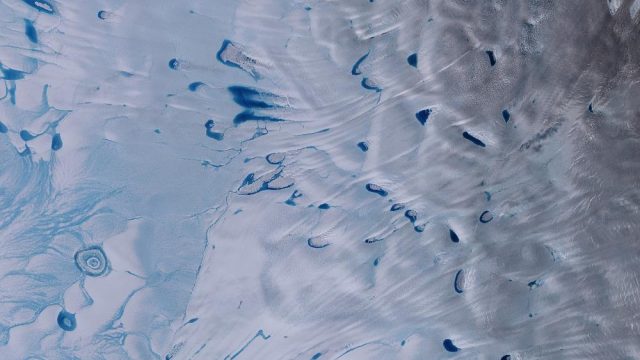 The heatwave that last week gripped Europe and smashed temperature records has now settled in Greenland… and the results are startling.

The second-largest ice sheet in the world is melting rapidly and the heatwave is exacerbating the process.

While the thaw might seem distant geographically to many on the European mainland, its effects are far-reaching and consequential to every coastal resident in the world.

Greenland is already the biggest contributor to modern-day sea level rise and this melt in July alone had an impact equivalent to a 0.5mm rise in global sea levels.

Could the event break a record?

The thaw could break a record from July 2012, when 97% of the Greenland ice sheet experienced some degree of melting, because temperatures are expected to remain high, Ruth Mottram, a climatologist from the Danish meteorological service, told Euronews.

The “defrosting season” lasts until the end of August and only “then we will know what the final figures for the season are,” she added.

The first measurements on the ground on August 1 showed 2019 melt was 1.2 times that of the previous record melt in 2012.

Scientists at the Norwegian centre expect 190 gigatonnes of ice to melt from the sheet by the end of the month — not quite the record levels reached in 2012.

On Wednesday, the area that was exposed to temperatures above 0ºC and therefore considered to be melting consisted of 51% of the ice sheet — the highest percentage recorded this year.

What was the problem this year?

The thaw season in Greenland started a month earlier than normal in 2019, the second earliest date on record.

This along with an episode of extreme thaw in June, followed by high temperatures in July, topped off with the current heatwave, contributed to the big thaw.

Temperature recordings were higher than normal at all weather stations in the country on Wednesday, said Mottram, but the “peak melt” is scheduled for Thursday.

“This will cause temperatures to rise more than 10C above average on the entire Greenland ice sheet.”

Using the Copernicus European observation satellite network we can compare the thaw situation at the end of June in the same area in 2019 and the previous years.

Although it is not a scientific test, the differences are evident. Ice appears “flooded” in many areas.

Using the Copernicus European observation satellite network, we can compare the thaw at the end of June 2019 on the northeastern Greenland ice sheet to the same area in previous years.

What are the adverse effects of the thaw?

While rising sea levels are one effect of Greenland’s ice sheet melting, the circulation of air mass is another problem.

Masses of fresh water poured into the sea remain on the surface because salt water is heavier.

With these consequences in mind, climate campaigners are calling for action in Greenland to limit the ice loss in Greenland.

The Arctic as a whole is warming a rate that is twice as fast as the rest of the globe — a phenomenon that has been attributed to human-caused climate change.