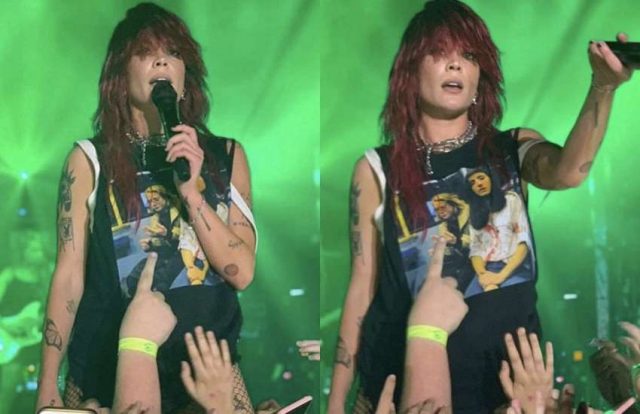 Pop singer Halsey wore a T-shirt with the faces of a lesbian couple who were violently beaten in London before making a powerful speech against homophobia at a gig last night (10 June).

To a packed room at the Electric Ballroom in north London, the singer spoke about how ‘every day’ is ‘Straight Pride,’ and that the end of Pride does not mean the end of activism.

The bisexual singer then got the crowd to chant ‘I will not be afraid,’ to the delight and heart-break of many of her fans.

After a day of duvets, rain ponchos, and umbrellas, soaked Halsey fans entered the Electric Ballroom in Camden, an eclectic neighbourhood of North London.

Considering that the the indie pop singer regularly does sold-out arena tours, the 1,500 capacity venue was an intimate concert.

The New Jersey-born singer wore a t-shirt with a photo of Melania Geymonat and her girlfriend Chris for the gig. The pair were brutally beaten on a bus towards Camden last week.

On the back of the T-shirt, a statement read: ‘Fuck your straight Pride.’ A direct comment on a group of men in America attempting to organize a , Massachusetts.

In a touching tribute, Halsey did a four-minute tribute to the couple. Touching on why ‘straight pride’ is not a good idea.

‘Do you guys see the two young women on my shirt?’ she asked the crowd, ‘do you know who they are?’

Crowds of fans then shouted: ‘Fuck your straight Pride.’

She continued: ‘The two people on my shirt are a young couple called Melania and Chris. And a couple nights ago, right here, they were assaulted because they’re lesbians.’

But she added: ‘The sharp reality is, after the Pride parades are over and after the bars close their pride nights, when the glitter is being swept out of the streets, a lot of people get on those trains and they get on those buses and try to wash the glitter off their bodies.

‘And they peel the stickers off their clothes, because when Pride is over, it’s not safe to be gay anymore.’

‘Halsey continued: ‘Because they are worried that someone is going to viciously assault them or viciously attack them. So, when people around the world ask them: “Why isn’t there a straight Pride parade?”‘

‘The answer is, because if there was one, you wouldn’t have to get on the bus and be terrified of getting fucking beaten up or killed afterwards.

A fan handed Halsey a Pride flag, which she then draped over herself.

In the crowd chanting loud and proud was Lilly. Speaking to Gay Star News, the 21-year-old said: ‘When I realized what the shirt was, I just immediately started crying.

‘I think she was extremely brave to wear that shirt with that picture as a message to her queer fans to resist but also to the rest of the world who naively thinks we don’t need pride marches anymore.

‘People love criticizing whatever she does so her wearing a message as blunt as “fuck your straight pride” was incredibly fearless.’

‘The entire crowd chanting “I will not be afraid” together felt so so good.

‘You could feel hope in those words but also a lot of anger. It felt like a protest, which is what pride needs more of nowadays in my opinion.’

Last week, Ryanair flight assistant Geymonat was riding the night bus home with her girlfriend Chris when the pair were attacked by a group of men.

At around 2.30am, on a Camden-bound bus when four men made lewd comments, punched them several times, and robbed them. They were both treated at a hospital for facial injuries.

Politicians, celebrities, activists, and the public alike widely condemned the attack in what has been seen as a stark and harrowing reminder of the continuing rise of ant-LGBTI hate crimes in London.

In fact, over the last four years, according to , crimes have been on the up.