Home Gay Life Have an STI? This infamous evangelical preacher wants to sell you a... 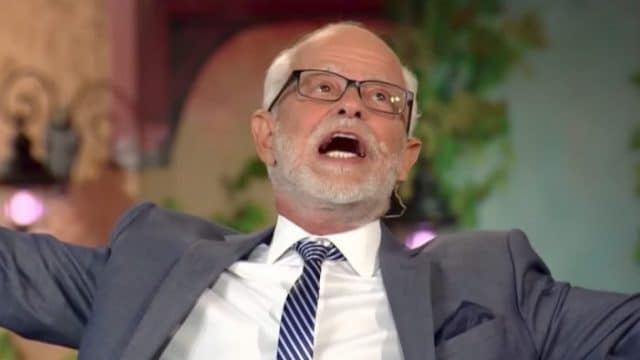 Jim Bakker — yes, the former host of the Praise the Lord (PTL) club with his then wife Tammy Faye Bakker who was busted for fraud and sexual misconduct in the late 1980s and early 1990s — has been making a comeback over the last few years, combining hard-right religious conservatism with “doomsday prepping” and good old-fashioned hucksterism.

Alongside his support of President Trump and others on the right, Bakker regularly claims natural disasters such as hurricanes Harvey and Matthew, as punishments sent by God. He also sells goods with dubious qualities, such as buckets of freeze-dried food to help his followers survive the Biblical apocalypse.

One of the latest products in his arsenal is of special note, a supposed “Silver Solution” he sells for $125 that will cure your sexually transmitted infections.

“You know, the amazing thing is it’s safe for babies,” said Bakker while hawking the Silver Solution Combo Pack on The Jim Bakker Show. “It’s the most amazing product. It’s proven to kill every venereal disease there is.”

The rest of his presumably hand-picked panel helping to sell the product sat silently as he discussed venereal diseases and babies in very nearly the same sentence.

This is now the second time that Jim Bakker has claimed that the silver gel he sells on his program has been “proven to kill every venereal disease there is.” pic.twitter.com/QsDMemBXjB

Text on the website, presumably approved by Bakker, goes into deeper details about the purported abilities of the metal.

“Silver is one of the most beautiful metals that exists. Man has worked for thousands of years to purify and perfect it. Silver is classified as a precious metal, and as such has been highly sought after. ‘Precious’ is a good, descriptive definition of what silver really is,” reads the copy.

“So many people talk about it daily, but so few actually know what it can do,” the ad copy continues:

“We may have barely begun to scratch the surface in the knowledge of what this beautiful and amazing metal can do to help reduce suffering and possibly save mankind. Silver has natural, God-given actions unlike any other metal or element that exists. There are many other elements that have value, but none has been blessed with the medicine chest of medicinal effects that silver has.”

“For example, silver has the ability to help with three of the main parts of the body’s healing process.”

It then claims that silver is an antimicrobial that has the ability to, “kill a broad spectrum of pathogens like problem bacteria, yeasts, fungus, many parasites, and it can even kill or neutralize deadly virus,” while also helping to “reduce inflammation” and regenerate body tissue.

One might miss a link just below this breathless copy, where a link to a Proposition 65 warning required by the state of California warns that a product such as this may contain chemicals known for “causing cancer or reproductive toxicity.”

So much for the claim that their solution is “safe for babies.”

One more time for those in the back of the room, silver is not a cure for any illnesses — sexually transmitted or otherwise. Go see a real doctor instead of getting medical advice from a televangelist.