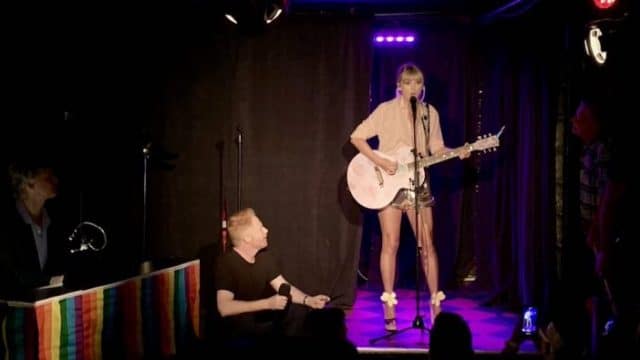 Taylor Swift recently showed her support for LGBTQ fans by dropping a new single, “You Need to Calm Down,” which directly addressing queerphobes. She also held a surprise performance at the historic Stonewall Inn last night, playing a few covers and one of her hits just as New York City prepares for World Pride later this month.

Variety reports that after performing two songs by Sara Bareilles “including a version of ‘Brave’ that had virtually all of the 100-odd lucky people inside singing along,” she was “greeted by the evening’s headliner, Modern Family star Jesse Tyler Ferguson.

After thanking him, she said, “I heard [“Shake It Off”] is Jesse’s favorite song to do at karaoke — which is an incredible rumor, I really want to believe it’s true. So if there’s anything you (Ferguson) feel like you want to jump in on, a part that you’re really good at, just sing, dance and be yourself — this is a really safe space!”

She then played the song.

Here’s video of her performance: