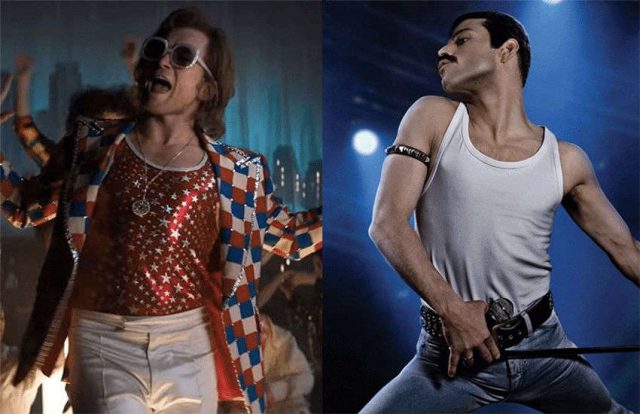 Dexter Fletcher, director of triumphant Elton John biopic Rocketman, has said he decided against asking Rami Malek to cameo as Freddie Mercury in his new movie Rocketman as it would’ve been ‘too knowing.’

Rami of course won an Oscar for his role in last year’s Bohemian Rhapsody, the Queen/Freddie biopic.

Dexter stepped in to direct the film towards the end of production, replacing the outgoing Bryan Singer.

And while this professional syncronisty could’ve led to one of the best movie easter eggs ever, the opportunity sadly ‘didn’t come to pass.’

Speaking to GSN during a recent promotional interview for Rocketman, Dexter was asked ‘were you ever tempted to invite Rami Malek to be a part of this film?’

He replied: ‘There was an idea I had one point, where Elton’s in a restaurant with his mother. I thought John Reid and Freddie could be at another table and they wave at each other!’

‘That would have been amazing,’ he furthermore admitted, before adding ‘[but] it didn’t come to pass.’

‘It would’ve been a little too knowing….’ he explained. ‘I’m not looking to set out to make a cinematic universe!’

John Reid of course served as a manager to both Elton and Queen at the height of their careers.

He is played by Richard Madden in Rocketman and Aiden Gillen in Bohemian Rhapsody. (Proving what a small world showbiz is, both those actors have also worked on Game of Thrones!)

Former child actor Dexter also told us last month that he’d be interested in doing a biopic in the future, saying: ‘That sounds like a real rollercoaster ride!’

He furthermore said: ‘If I was to tackle any other icon like that, it would be her. She’s extraordinary.’

Rocketman of course stars Taron Egerton as the openly gay Elton. The star’s hits include Your Song and Candle In the Wind. He has sold 300-400 million records worldwide.

The Freddie-fronted Queen, meanwhile, are known for hits like Another One Bites the Dust and The Show Must Go On. They have sold between 170-300 million records.