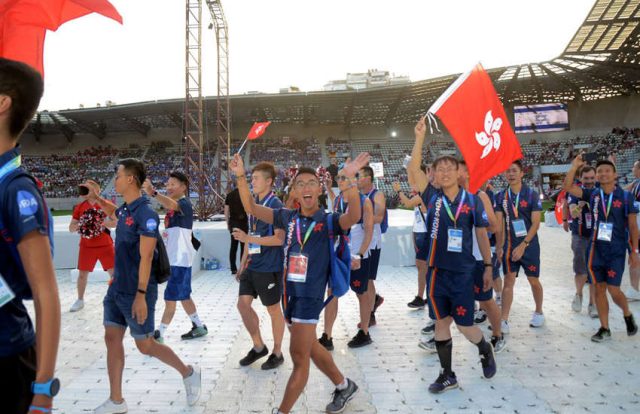 A whopping 36 sports will be offered at the taking place in Hong Kong in November 2022.

Up from 35 in the 2018 games held in Paris, new events include locally-popular sports including dodge ball and dragon boat racing.

For the first time, the competition will also include e-sports.

‘While compiling the list we wanted to make sure that we struck a good balance between traditionally popular sports among Gay Games participants from around the world, and sports enjoyed in the region’ said Sabrina Yang, Gay Games Hong Kong Sports Director.

Sean Fitzgerald, co-president of the Federation of Gay Games (FGG), said the line up was a ‘perfect mix ensuring that Hong Kong becomes a trailblazer for increased progress in diversity and inclusion in the world’s most populous region.’

The Gay Games first took place in San Francisco in 1982 and returns to a different global city every four years.

Dennis Philipse, Chairperson of Gay Games Hong Kong, said he expects 2022’s games to be the largest yet, with 15,000 participants.

‘Two-thirds of the world live in Asia, and Hong Kong is a four-hour flight or less from 24 different countries’ he told Gay Star News.

‘Lots of people who could never attend the Gay Games will now have the opportunity to join’.

‘Imagine you live in rural China and you are not out to your family and friends, and you walk into the stadium of the Gay Games in Hong Kong together with 15,000 participants—that’s a magic moment that will empower everyone, change people’s lives, and give them a sense of belonging’.

He said he expects the games to add US$130 million to Hong Kong’s economy.

What’s more, Philipse and his team have a keen eye on diversity and hope that their list of sports will encourage young, transgender, and female participants.

This year, Hong Kong will host the city’s first Pride Run and the third Out in HK Tennis Open with 100 participants.