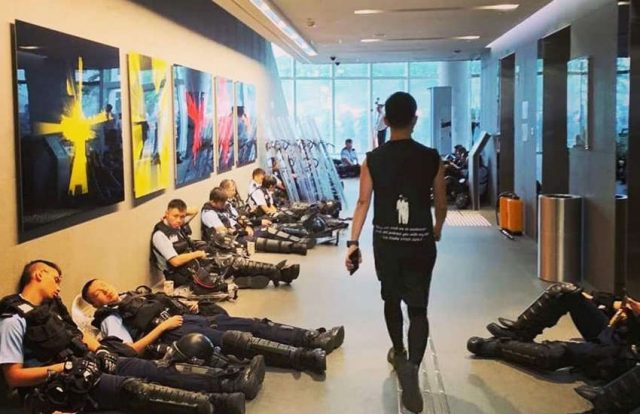 Hong Kong’s only openly gay lawmaker, Ray Chan, is leading some of the city’s largest protests since it was handed back to China in 1997.

Thousands of protesters were met with tear gas and rubber bullets as they surrounded the city’s Legislative Council building on Wednesday (12 June), postponing discussions of a controversial extradition bill.

The law under discussion would let authorities remove people accused of a crime to countries without a formal extradition agreement, including mainland China.

Critics, including Chan, say it would infringe freedom and autonomy in the special administrative region of China.

China’s courts are considered neither free or fair and regularly impede human rights to freedom of speech, assembly, and religion.

‘The people don’t trust that the Government will ever say no to extradition requests from Mainland China. Their life, property, and freedom are at risk’ Chan explained.

‘It will have a chilling effect on speech, because nobody wants to be seen as a troublemaker’ he also said.

‘Beijing and its puppet government have broken promises after promises’ Chan told Gay Star News. ‘This breakdown of trust leads to this crisis.’

Chan on Wednesday also shared photos of himself with riot police resting in the Legislative Council building.

The UK handed its former colony back to China in 1997. But, China agreed to govern Hong Kong under ‘one country, two systems’ for 50 years.

Under this system, Hong Kong is not subject to China law and retains its own levels of freedom of the press and free speech.

But, Beijing is increasingly influencing the region. Activists are hitting back demanding greater democracy.

Organizers of a protest against the extradition bill on Sunday, mean said more than one million people took to the streets.

The extradition law, and greater influence over Hong Kong, could affect LGBTI rights in the city.

Police in China earlier his year detained a Hong Kong LGBTI activist earlier this year when he traveled to the mainland of China, for example.

China, where gay sex is legal but there is no recognition of same-sex unions or anti-discrimination protections, has also been criticized for rampant conversion therapy.

In the last two years, Hong Kong, however, has made significant moves towards recognizing same-sex couples.

Courts in China, meanwhile, have upheld anti-LGBTI laws. They have also dismissed calls to end state censorship of LGBTI content.