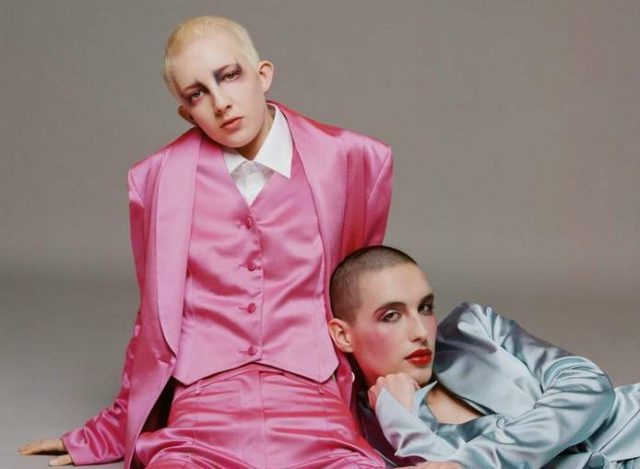 British fashion brand House of Holland has released a new capsule collection of suits based on the colours of the transgender pride flag, in support of the trans community.

The Trans Pride Suiting Campaign, which was launched on Monday (June 10), will raise money for the Albert Kennedy Trust (AKT).

Last year, House of Holland raised over £8,000 for AKT with its collection of eight suits themed around the rainbow Pride flag.

Henry Holland, who is a patron of the AKT, said the new collection is “very close to my heart.”

“With the rights of trans people both here in Europe and in the USA coming under real threat, it was important to me as a designer to create something that showed my support to this community,” he said.

25 percent of the profits from sales of the new trans flag-themed collection will go to AKT.

This year’s collection features blue, pink and white suits – the colours of the trans flag – as well as a black version.

The three-piece satin tuxedos will be part of House of Holland’s Resort 20 collection, and feature a fitted blazer with large scalloped lapel, fitted waistcoat and a flared tailored trouser.

Global LGBT+ figures, like Paris Lees and Munroe Bergdorf, will join together in a network of LGBT+ influencers and spokespeople to support the campaign, according to the Evening Standard.

The campaign was shot by Louie Banks and features the models Finn Buchannon and Maxim Magnus.

The AKT is a UK-wide LGBT+ youth homelessness charity, which focuses on prevention and early action, and provides: safe homes, mentoring, training, advocacy and support to young people who are homeless or living in a hostile environment after coming out to their parents, caregivers, and peers.

It was formed in Manchester in 1989 by Cath Hall, a foster carer and founding member of the Manchester Parents Group.

Hall founded AKT because she had “become acutely aware of the rejection and ejection of young LGBT people from their family home and the homophobia they faced within school and society,” according to the AKT website.