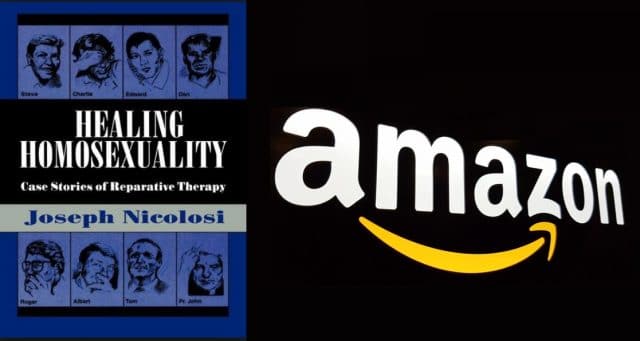 Vice News reported on Friday that it had obtained a handout distributed on Wednesday by the Republican Study Committee — a conservative caucus that includes more than 70% of all GOP House members – urging members to “contact Amazon with concerns” about what they referred to as “Amazon censorship.”

The “censorship” in question concerns Amazon’s decision to remove books by Dr. Joseph Nicolosi who is known as the “father of conversion therapy.”

Amazon removed books by Dr. Joseph Nicolosi, a clinical psychologist who is credited with originating gay conversion therapy, a debunked — and in some cases illegal — pseudoscientific method of trying to turn gay people straight.

Nonetheless, the Republicans want to lobby to get his books — such as “A Parent’s Guide to Preventing Homosexuality” and “Reparative Therapy of Male Homosexuality” — back in circulation.

“These books were available on Amazon until an LGBT activist repeatedly petitioned Amazon to remove the ‘homophobic books’ from the company’s website. Amazon removed Dr. Nicolosi’s books and those of several other authors on similar topics,” the document continues. “It is not clear that any of the banned books have violated an Amazon policy, but rather that the company is choosing to censor speech.”

Amazon confirmed earlier this month that it had stopped selling books because they violate Amazon’s content guidelines.

The Republican Study Committee’s memo recommends that House members read an article from the Federalist, which claims Amazon is being hypocritical because it still sells books by Adolph Hitler, Joseph Goebbels, Benito Mussolini, Timothy McVeigh and David Duke.

“The gay community, a supposedly oppressed and marginalized group, wields an extravagant amount of power today, and does so without regard for the rights of anyone who chooses to not support them,” according to the article. “How long until the most widely read book in the world is banned because it takes a dim view of homosexuality?” the author asks, referencing the Bible.

A Change.org petition urging Amazon to stop stocking Nicolosi’s books had been signed by more than 82,000 people prior to decision to remove them.

Sky Gray, the leader of the online petition, said in an e-mail to Vice News that he anticipates the effort to ban conversion therapy books will get harder now that members of Congress are involved.

”It shouldn’t be surprising that the conservatives are in support of conversion therapy; they’ve made it clear they are in the past,” Gray said. “It looks like this is going to be a bigger fight than previously anticipated, though I knew it would be an uphill battle. Looks like the hill just got a lot steeper, with this knowledge in mind.”

Eighteen states and a number of cities and municipalities — including the District of Columbia — have passed bans on conversion therapy.

Colorado became the 18th state to ban the practice earlier this year, with openly gay Gov. Jared Polis signing the ban into law.