WASHINGTON (Reuters) – The kick-off of the second round of Democratic presidential debates on Tuesday featured a clash of liberal and moderate agendas, highlighting sharp divisions within the party over how to beat Republican Donald Trump in the November 2020 election.

Ten other White House hopefuls will face off on Wednesday in Detroit on the second night of the back-to-back debates.

At center stage will be a rematch between front-runner Joe Biden and rival Kamala Harris, whose explosive confrontations over race in last month’s debate produced the 2020 Democratic primary contest’s most contentious moment to date.

Here is a look at how the candidates did on the first night of debate.

The Montana governor was a newbie to the debate stage, having entered the race too late to qualify for the first round in Miami. He quickly attempted to make an impression by labeling progressives’ proposals “wish-list economics.”

Bullock accused liberal front-runner Bernie Sanders, in particular, of proposing policies made for “press releases” rather than being realistic reforms.

He reminded viewers how difficult it had been to pass the Affordable Care Act, President Barack Obama’s signature healthcare achievement, which Sanders and fellow liberal Elizabeth Warren would junk in favor of a single-payer “Medicare-for-All” system.

“It used to be just Republicans who wanted to repeal and replace,” Bullock said. “Now, many Democrats do as well.”

As he did in the first debate, the mayor of South Bend, Indiana, and fundraising dynamo showed a steadiness on stage and a good command of policy. He received one of the biggest ovations of the evening when he implored the candidates to dismiss Republican criticism of their proposals.

It was a strong line, cannily crafted so Buttigieg did not have to pick a side in the emerging battle between moderates and progressives. Even better for Buttigieg, a former Trump White House aide, Mercedes Schlapp, replied on Twitter: “Yes @PeteButtigieg, you are all crazy socialists.”

The first Democrat to declare a candidacy for president was unknown to most voters, but the former member of the U.S. House of Representatives finally landed time in the spotlight on Tuesday night.

Given multiple chances to spar directly with Warren and Sanders over their sweeping policies ranging from healthcare to immigration and trade, Delaney took on the role of the loudest critic of their “impossible” ideas.

“I think Democrats win when we run on real solutions, not impossible promises, when we run on things that are workable, not fairy tale economics,” Delaney said.

Ultimately, the limelight may not do much to guarantee him a spot in the September debate. The Democratic National Committee has set higher funding and polling requirements to qualify, and Delaney has been stuck at the bottom of opinion surveys.

The former Colorado governor did not have the kind of breakout moment he needed to bolster his faltering campaign but still produced one of the night’s best punch lines when he assailed Sanders over socialism.

Asked by moderators if the self-proclaimed Democratic socialist is “too extreme” to win the White House, Hickenlooper said embracing his radical agenda would doom the party in the general election next year.

“This notion that you’re going to take private insurance away from 180 million Americans… or the Green New Deal, make sure that every American is guaranteed a government job that they want, that is a disaster at the ballot box,” Hickenlooper said.

“You might as well FedEx the election to Donald Trump.”

Like many of the moderates with her on stage Tuesday night, Klobuchar kicked off the debate by signaling she would make the case for why a pragmatic, middle-of-the-road approach was better than progressive ideals, saying her candidacy was about “bold ideas, but they are grounded in reality.”

Unlike her fellow moderates, the three-term senator from Minnesota chose to direct her fire at Trump and Senate Majority Leader Mitch McConnell.

When CNN moderator Jake Tapper asked Klobuchar who on the stage was making promises to get elected, Klobuchar demurred from naming names.

“Everyone wants to get elected, but my point is this: I think when we have a guy in the White House who has now told over 10,000 lies, that we better be very straightforward with the American people.”

Former U.S. Representative Beto O’Rourke’s performance again did little to boost a campaign struggling to live up to the high expectations for his White House bid set by his surprisingly strong, though ultimately unsuccessful, quest in 2018 to oust Republican U.S. Senator Ted Cruz in their home state of Texas.

Despite producing some solid opening lines, he neither had a breakout moment needed to revive his campaign nor was at the center of the conversation even as lesser-known rivals like Delaney clashed head to head with top-tier candidates.

“In the face of cruelty and fear from a lawless president, we will choose to be the nation that stands up for the human rights of everyone, for the rule of law for everyone and a democracy that serves everyone,” O’Rourke said at the beginning of the debate.

O’Rourke’s campaign said he has qualified for the third debate series in September, when the Democratic Party has established more stringent criteria. But his performance on Tuesday will likely do little to restart his flagging fundraising or reverse his downward slide in opinion polls.

After a somewhat quiet debate performance last month, the Vermont senator came back to his true form – unapologetic and irascible in the face of attacks from rivals trying to ding his progressive armor.

Sanders, who has held onto his second-place standing in most opinion polls competing neck and neck with friend and fellow liberal Warren, delivered a full-throated defense of his progressive policies. Most notably among them was the Medicare-for-All health plan that came under fire from the more centrist candidates assembled on the stage.

Sanders, along with Warren, is seeking to gain ground against former Vice President Joe Biden, who currently leads the Democratic field.

The moderate congressman from Ohio failed to secure a breakthrough in the debate, and his most memorable moment may have been telling Sanders not to shout.

“You don’t have to yell,” Ryan admonished after Sanders vigorously defended his plan to curb greenhouse gas emissions.

In another war of words with the rival, Ryan took a jab at Sanders when the Vermont senator said polls have him beating Trump in the 2020 election.

“Well, I would just say Hillary Clinton was winning in the polls, too,” Ryan said, bringing back the painful memory of the Democratic candidate who unexpectedly lost to Trump in 2016.

Ryan, polling below 1% among the two dozen Democratic candidates, put forth a modest goal in his closing remarks, saying, “I hope tonight, at some level, I captured your imagination.”

Under attack from moderate rivals over her liberal policy positions, U.S. Senator Elizabeth Warren swung back and accused her opponents of sounding like Republicans.

As Delaney accused Sanders of trying to take private insurance away with his Medicare-for-All proposal, Warren interjected in the debate to defend her friend.

“We are the Democrats. We are not about trying to take away healthcare from anyone. That’s what the Republicans are trying to do,” she said. “And we should stop using Republican talking points in order to talk with each other about how to best provide that healthcare.”

Nothing seemed to slow her down rest of the night.

“I don’t understand why anybody goes to all the trouble of running for the president of the United States just to talk about what we really can’t do and shouldn’t fight for,” Warren said to applause.

Self-help guru Marianne Williamson has been a long shot to win the Democratic nomination, but her faithful following for her spiritual guidance books have helped her qualify for the debates.

And on Tuesday, she received one of the loudest applause lines when she pointed to the water crisis in the majority-black city of Flint, Michigan, an hour north of Detroit where the debate was taking place, to highlight racial and economic injustice in the country.

“Flint is just the tip of the iceberg… We have communities, particularly communities of color and disadvantaged communities all over this country, who are suffering from environmental injustice.” 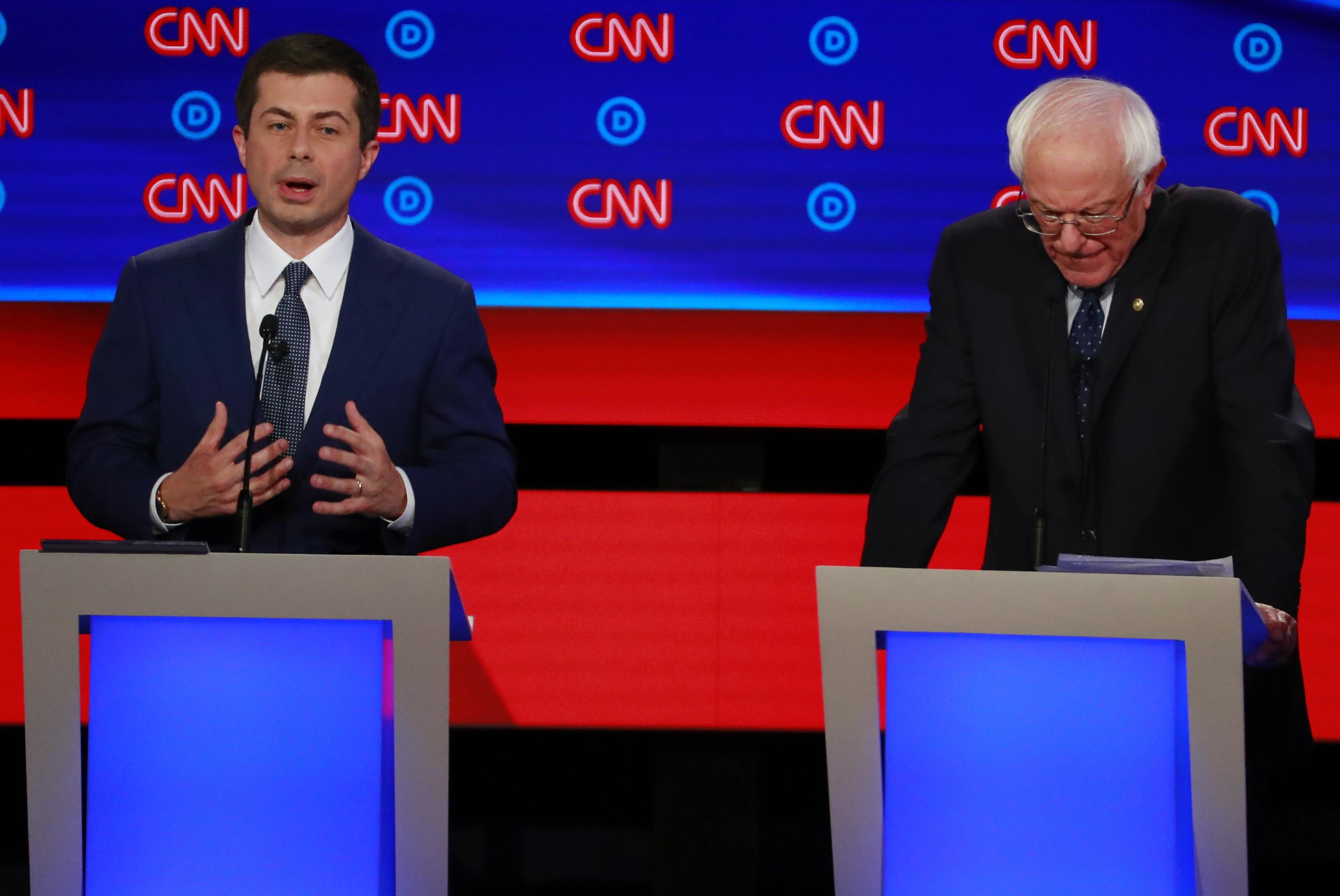 Like last month’s debate performance, she again produced a viral moment when she warned of Trump’s “dark psychic force.”

“If you think any of this wonkiness is going to deal with this dark psychic force of the collectivized hatred that this president is bringing up in this country, then I’m afraid that the Democrats are going to see some very dark days,” she said.

Williamson, who has one of the smallest campaigns and is spending nearly all the money she brings in from donors, will need to find a way to capitalize on the moment if she wants to qualify for the third debate in September in Houston.