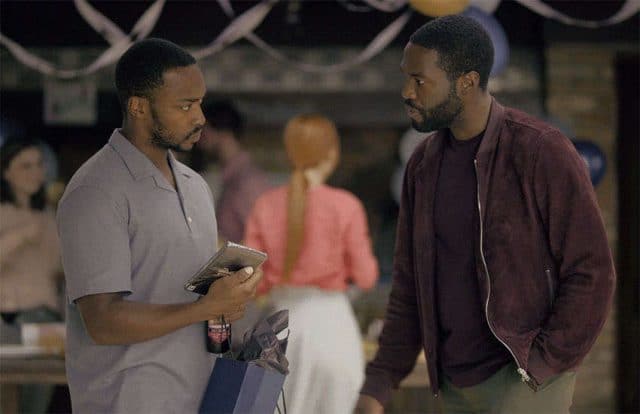 ‘Heteroflexibility’: the idea that two straight people can repeatedly have gay sex, but maintain a straight identity.

I’ve felt this way for years. That is, until last night.

No, I didn’t Netflix and chill with with a hetero – rather, I binge-watched season five of Black Mirror. (Alone.)

Now, like many LGBTI people, my favorite BM episode so far is . In it, the younger avatars of two elderly women fall in love in a computer.

The episode was so beautiful and mind-expanding, it won an Emmy.

And while it doesn’t quite reach the lofty heights of its spiritual SE4 cousin, it has blown my mind in bigger, broader ways.

Basically, it has me questioning everything I think I know about gender and sexuality – in a way no amount of babbling YouTube vloggers ever could.

And as a boring 30-something cisgendered gay man at risk of becoming stuck in his ways, this is no mean feat.

Complicating matters, however, is the fact Karl, who is single, plays the game as a female character, Roxette (portrayed on-screen by Pom Klementieff). Meanwhile Dan – who’s in an opposite sex marriage and is father to an infant son – plays as a male, Lance (Ludi Lin).

The virtual sex the guys have is between a man and a woman. It’s also transcendently pleasurable for both of them… and it seems there’s a romantic dimension to it, too.

The strangeness of the scenario freaks Dan out, and he retreats back to his wife. Karl, however, continues to experiment, having sex with an array of strangers/characters.

But nothing beats the thrill of Dan-as-Lance. And ultimately, Dan feels the same about Karl-as-Roxette.

Karl decides to settle things once and for all, and orders Dan to kiss him in real life, so they can put that love to the test. (‘Just shut up and kiss me, man,’ he demands).

Just when you think you know what’s going to happen next – bam – the guys feel nothing.

At first, I was almost infuriated, unconvinced. ‘Where’s the guy-on-guy action I was waiting for?!’ I asked the TV, communicating with technology, playing into writer Charlie Brooker’s hands like putty.

Before long, the penny dropped. The point the story is making – at least, as per my interpretation – is far more interesting than ‘straight guys try gay sex and become gay, bi or whatever else.’

Although there’s chemistry between them in real life, it’s only when they merge with Roxette and Lance that the correct balance is struck.

Whatever that undeniable connection that exists between the men, it isn’t physical – it’s spiritual, digital and very situational.

As with most Black Mirror stories, by the end, the scenario in question feels entirely plausible, if not totally inevitable at some point in the near future.

The success of the episode is furthermore elevated by how amazing it looks – the gaming sequences with Roxette and Lance are otherworldly, awe-inspiring – plus the magnificent, utterly convincing performances of the two lead actors.

Anthony Mackie, especially, communicates the fear and panic that often goes hand-in-hand with sexual exploration so quietly and so beautifully.

Yahya, by contrast, goes in the opposite direction: all thirsty, uncontainable excitement, he delivers even the most far-fetched ideas and dialogue with total confidence and conviction.

I can’t overstate the effect of this Black Mirror episode.

From heteroflexibility to bromance to the cliche of ‘straight guys going gay’, the story’s created space and tolerance in my perception of sexuality where there wasn’t one before.