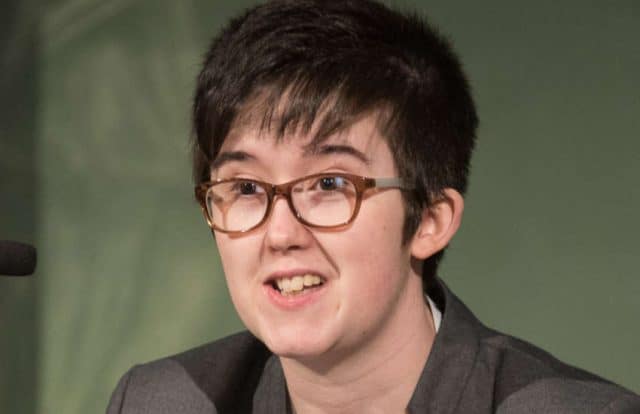 Hundreds gathered in the streets of Belfast today (25 May) for a three-day memorial walk for the late Lyra McKee.

Members of the dissident republican group, New IRA, allegedly shot journalist McKee to death while she covered riots in Londonderry – also known as Derry – on 18 April.

This weekend (25-27 May), friends, family and sympathizers will walk 67.8 miles (109.1km) from Belfast to Derry. They’re peacefully protesting, while warning against further violent clashes.

Organizers are calling it Lyra’s Walk.

At 9am, they gathered and then set off at Writer’s Square in Belfast, wearing t-shirts and carrying flags with messages of peace.

Snow Patrol’s frontman, Gary Lightbody, is due to join the walkers on the last leg on Monday before a rally at the Guildhall in Derry.

Lyra’s Walk is trying to raise money for the running costs of the event.

According to the , crowdsourced funds will pay for first aid equipment, event insurance, campsite facilities, transport, printing costs and fuel.

The event page stated: ‘Any surplus donations will be donated to the Suicide Prevention and mental health awareness charity Mindskills, at the request of Lyra’s family.’

Treasurer Christopher Pattison wrote: ‘We just want to extend the deepest gratitude for all the extremely generous donations and lovely words of support for what we are doing for Lyra’s memory, her legacy and for peace.’

He then added: ‘Thank you. Please continue to spread the word.’

‘I want my nieces and nephews to grow up in peace,’ one walker said today. ‘Not the way that we grew up with a lot of trouble.’

She then said: ‘I just don’t want that for the young people of today.’