Home Gay Life “I’m Pretty Sure My Husband Is Gay, But He Insists He Isn’t” 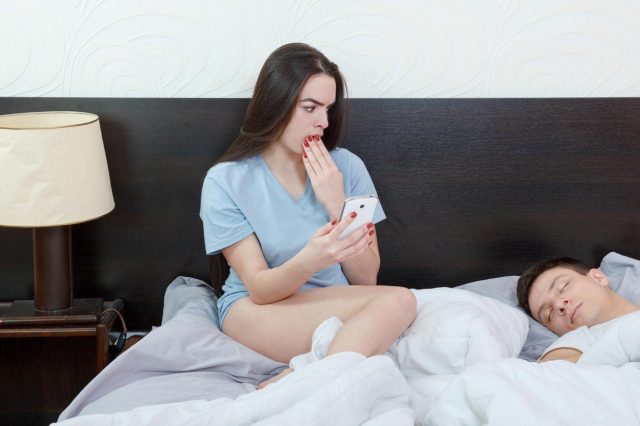 They’ve had sex only once in the last six months. He’s been distant and has been gaining weight. Oh, and he has Tinder installed on his phone. And it’s set to look at men.

A despondent woman has posted her woes to Reddit, desperate for advice. “Octthrowaway16” is absolutely convinced she’s married to a gay man, but he insists it’s all in her head.

After suspiciously snooping on his phone and finding Tinder, she approached her husband.

“He got incredibly angry with me for snooping,” she writes, “which I understand, and became very defensive when I asked about Tinder.”

“We had a huge argument and nothing was really resolved. He insisted that he installed Tinder as a joke.”

Eventually, she let it drop. But a month later she became suspicious again, and began to root around in his computer:

In his deleted emails folder, I found several nude selfies that he sent to various men, replies to craigslists solicitations from men and several dick pics that I didn’t recognize. I confronted him again and he went apocalyptic on me.”

After lots of yelling and screaming, he finally admitted that he “likes to be penetrated,” but has been afraid to tell her.

So they wiped away one another’s tears, and then she pegged the flying fuck out of him.

We did it and it was a little weird but he clearly enjoyed himself. I was careful to not be judgmental. I thought we were all good until a couple of days ago. His phone was sitting on the counter while he was upstairs and a notification went off. It was Tinder.”

More fighting ensued. Her husband swears that he just “gets off on the attention from guys” but isn’t sexually attracted to them. She doesn’t believe him, and now she’s pulled her daughter out of daycare and is staying at her parent’s house.

“Is this a normal thing that I am blowing out of proportion?” she asks. “Is there a reasonable way to look at this and think that he is telling the truth? I don’t want to destroy my marriage, my life.”

As you can probably imagine, Redditors have been tripping over each other in their eagerness to weigh in.

“Don’t get hung up on some gay/straight dichotomy,” writes mawkish. “He is going outside your marriage for sexual gratification. He is seeking the attention of strangers by sending naked pictures of himself. Obviously this is unacceptable. Don’t fixate on labels. Fixate on the unacceptable behaviour.”

Don’t focus on the question of whether or not he’s gay, That’s frankly irrelevant. The issue is that he doesn’t respect you and isn’t honest with you.”

“If you work thru this,” writes renaissancex, “expect to be in this situation in about 6-8 months again.”

“I hear how you’re clinging to everything that you once knew,” Lurlo says .”I’m sorry, my heart breaks for you. He isn’t only cheating, he’s lying, maybe even to himself.”

Weigh in in the comments below.