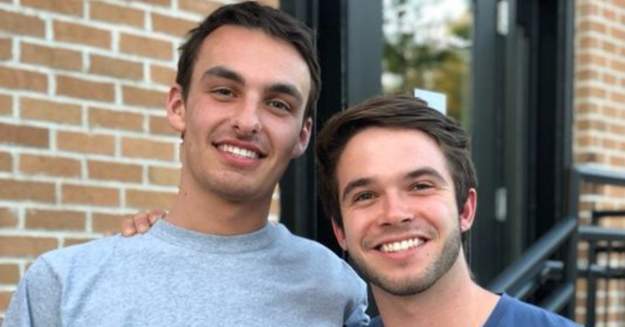 When Ben Martella and Alec Jansen got picked up from Butler University, they thought they’d be on a simple lyft ride to Broad Ripple, Indianapolis. Sadly, that’s not what they got.

While the couple was riding towards their destination, they decided to share a quick kiss. Once their lyft driver saw this, he ordered them to get out.

When the two found themselves standing on the corner of Meridian and Westfield around 5 p.m. on May 5, they were deeply upset.

“We basically pecked, nothing out of the ordinary,” said Martella, who’s going into his sophomore year at Butler, to the Indy Star. “He looked in his rear view mirror. He was yelling. We were stunned. We didn’t know the reason for it. He said, ‘I’m going to end your ride. I can’t have that in my car. I don’t have that here.’ … I was really upset. It was a big reaction for such a small display of affection between two guys.”

Jansen, who’s entering his junior year at Purdue added, “We gave each other a short kiss on the lips. … I was just surprised the whole thing happened. It just didn’t seem like it was real.”

After being kicked out of the car, Martella tweeted out that he was discriminated against by the lyft driver. After his tweet gained traction, Lyft’s official twitter account responded and said, “We are so sorry to hear this! Please report this to our Critical Response Line by clicking the ‘Call Me’ button.”

Was just discriminated against by @lyft my ride kicked me out because I was kissing another man. He kicked us out and I still have to pay. Disappointed and feel unfairly judged by this service.

The pair did as they were instructed and were later refunded their money. But Martella wasn’t satisfied with just this. He wanted the driver fired.

Lyft has a “strict anti-discrimination policy” that includes sexual orientation, so Martella was in his right to demand that the driver, whose identity was never released, be fired.

After a few “very impersonal” emails with a man named “George” who is assumed to be the “Trust & Safety Specialist,” Martella was informed in three quick sentences that the driver had been “deactivated.” This means that he was essentially cut from the service.

That said, Martella and his family may take the case even further.

“My parents were really upset,” Martella said. “They both work for the federal government. My mom wanted to take further action. I’m kind of contemplating that. I talked to my mom about going to Indiana’s ACLU. I don’t know if that’s the right path to take. There’s really nothing I need out of the situation. It’s my fear for others.”

There is currently no state law protecting Indiana citizens from violations of civil rights based on sexual orientation. That said, there is an ordinance that includes sexual orientation in protections involving real estate, employment, public education, and public accommodations.

But, Matella and his parents have to consider if this is all worth diving in to find out if lyft counts as a public accommodation.