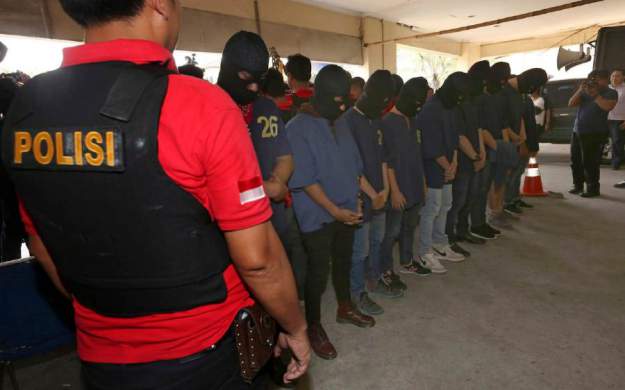 Indonesian police detained over 50 men in a raid on what has been described as a “gay spa” in Jakarta. Friday night found police holding 51 males and 7 employees. They will be charged under pornography and prostitution laws and some could face up to six years in prison. Four Chinese nationals, a Singaporean, one Thai National, one Malaysian, and one Dutchman, were also presnt, but none of the foreigners would be charged.

The arrests are the latest in a spate of high-profile police actions against gay clubs and parties in Indonesia this year that have called the country’s reputation for tolerance into question.

With the exception of the ultra-conservative Aceh province in northern Sumatra, homosexuality is legal in Indonesia. Even though this is the world’s third-largest democracy, it is also home to the world’s largest Muslim population.

“LGBT is clearly between men and men or same-sex relationships. Male prostitution,” Jakarta Police spokesman Argo Yuwono said, without clarifying further. He said that 6 of the 58 men will be charged and could face up to six years in prison under Indonesia’s pornography law.

“If they raided (this club) because they are gay, it is abusive, it is abuse of power,” said Andreas Harsono, a Jakarta-based researcher for Human Rights Watch, adding that there is no law against homosexuality as long as relationships are consensual. “If there is no victim, there is no crime,” he said.

Pornography law to “criminalize” such cases are often used by police, but that law itself is also problematic. Under the broad law, people could be charged if they had pornographic material on their cell phones.