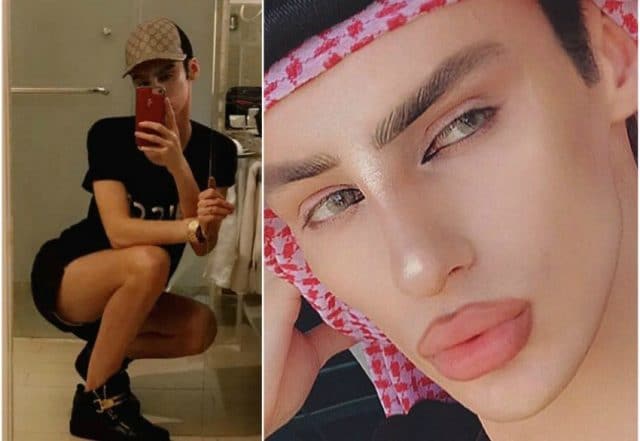 ‘If hell exists, I am sure it’s in this place’

A young, Instagram celebrity was arrested and thrown in Kuwaiti jail for two weeks, where he was allegedly abused and propositioned with sex to get out of jail. His crime was to have a ‘feminine face’.

King Luxy* was visting the Persian Gulf country when he was arrested at the Kuwait Avenue Mall. The 19-year-old was supposed to be in Kuwait for a night before jetting off to Dubai.
The Polish national arranged to meet with friends at the mall.

Luxy deliberately dressed conspiculously so he would not draw attention to himself.

‘Walking by restaurants area I was stopped by undercover CID (Criminal Invistigation Department) policeman complaining about the way I dressed and my ‘feminine’ looking face,’ Luxy told Gay Star News.

Six police officers then arrested Luxy in a heavyhanded show of force and taken to his hotel to pick up his belongings. Where a police officer allegedly propositioned him.

‘One of the policeman prosposed me having sex with him while other were waiting outside the room,’ Luxy said.

‘He gave me one last chance: having sex, or the police station. I refused so I ended up in handcuffs.

‘He called the police station and told them that he’s bringing in a third person for them to ‘make a man of me’.’

Spat on, head shaved and humiliated

Luxy claimed he was detained for more than two weeks, even though he was supposed to only be held for four days. He was not allowed to contact anyone, even a lawyer.

‘After they searched my phone and find out I am popular social media influencer in Middle East, every hour someone would open the door, laugh, spit and humiliate me, and then leave,’ he said.

‘They beat me, and took pictures of me with their personal cell phone cameras.

‘The police shaved my head hair and force to walking near all the other detainees to make me feel ashamed.

‘They all would follow me, kick from the back injuring all my bottom part of the body and swearing at me in Arabic.’

Luxy was kept in a cold, insect infested cell and forced to sleep on the floor with no blankets.

Before his release the police allegedly forced Luxy to sign a declaration that they had given him back all his belongings. But

Police reset Luxy’s smartphone so he could not access the photos he took while he was in jail and of his deportation documents. But the social media savvy Luxy managed to save the photos to his Snapchat ‘memories’.

Luxy who has been permanently banned from enterting Kuwait wanted to share his story to highlight the dangers facing LGBTI people in Kuwait.

‘If the hell exists, I am sure it’s in this place,’ he said.
Kuwaiti Police have been contacted for comment and at the time of writing have not replied.

For safety reasons, King Luxy did not want to share his real name.