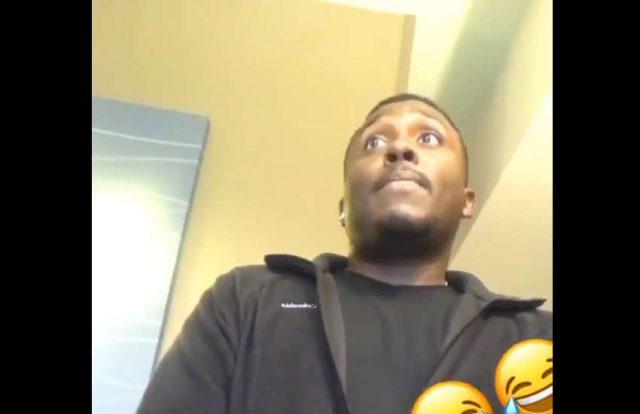 A man who works at Holiday Inn Express received praise from the internet after he calmly deflected a woman’s racism. Things got messy, however, when the internet dug into his social media history and found transphobic comments.

Craig Brooks, 26, works for the hotel chain in Austin, Texas. He quickly became internet famous after filming an interaction he had with a woman denying her services at the establishment.

In the video, Brooks is seen continuously apologizing to the unseen woman for not being able to accommodate her. He repeatedly tells her she called him the n-word on the phone, to which she apologizes. She also pleads for a room, which he denies, explaining the decision is ‘above him’.

Brooks told he works in guest services at the hotel.

When the woman called Sunday (2 June) night, Brooks explained to her the hotel had an automated reservation line and forwarded her there.

‘When I sent her there twice, she called back, and at this point she was hostile on the phone,’ he recalled.

The woman reportedly said her mom recently died and she needed a room, to which Brooks replied: ‘I told her, “I understand that but you don’t have to be so disrespectful and hostile.”‘

When he asked if she needed anything else, she allegedly called him an ‘effing n-word’ to her husband and then hung up.

Brooks called management of the Holiday Inn and said they told him they have ‘zero tolerance for racism’.

Following that, the woman came to the desk and Brooks proceeded to film their exchange. Eventually the woman’s daughter and other family members also approached Brooks to plead for a room.

In response to going viral, Brooks said he believes that happened because the story resonated with people of color.

‘Black Twitter loves it because I gathered her while being professional,’ he explained.

‘Everyone close to me is dragging me and saying, “That’s not how you would have normally handled it,” which is true,” he said.

‘But I have to think, “OK, do I lose my job while gathering her together, or do I stay professional?” And I could be petty about it. That’s the route that I went. The only thing I regret was I did not catch her face because she was so upset.’

One of the pitfalls of internet fame is people digging into past posts.

In the case of Brooks, people found a slew of tweets disparaging transgender people.

Some of Brooks’ comments include agreeing with Donald Trump on his trans military ban and claiming he’s ‘not against trans, I just don’t agree with it’.

In one tweet, posted in March, wrote: ‘Bro fuck trans people! Y’all are annoying as shit! Argue with someone who gives a fuck.’

Brooks also hit back at people calling him out for his transphobia.

Transgender people can, in fact, become pregnant, and be involved in other processes of childbirth. Last February, a trans woman was able to after the hospital induced lactation.

Brooks told BuzzFeed News: ‘They’re mad lol I said what I said. People are so sensitive. I’m gay and I KNOW people will not agree with me being gay. I just don’t and will never get trans. Period.’

Some are referring to him as a milkshake duck, which comes from a 2016 meme.

Oxford Dictionaries described the concept as ‘a person or character on social media that appears to be endearing at first, but is found to have an unappealing back story’.