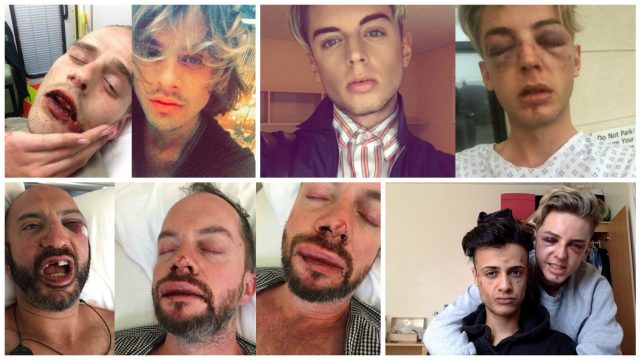 The internet has rallied around a gay couple who had their holiday ruined by a vile anti-gay attack.

Vestal and his husband Tristan, from London, were attacked while on a night out while on the Greek island of Mykonos.

The pair were just two days into their holiday when the attack took place, while they were leaving a well-known local gay hotspot.

The couple were hit on the head from behind and punched and kicked as they lay unconscious on the ground. Both suffered horrible injuries.

Tristan recalled: “We were out in Mykonos all day, having the most wonderful day you could imagine. We left our family quite late and went to a gay bar. We also had the best time there too. Everyone was so friendly and happy.

“When we left that bar, we were walking up the street talking with some guys we had met there, but then I looked back to see someone talking to Vestal (who we had not met) looking as though he was being quite threatening.

“I walked back up the hill to him and saw that he was backing Vestal up against a railing. Vestal said to me, ‘It’s OK, Tristan, I’ll deal with this.’ I remember saying to Vestal, ‘Come on, we need to go.’

“That’s the last thing I remember before holding Vestal’s head in my hands, on the street, where he had been unconscious for several minutes. We were both beaten unconscious and I had my two front teeth knocked out.

“Vestal became conscious in the hospital, and couldn’t understand what had happened to us. It seemed that this was a homophobic assault and we just couldn’t grasp how unbelievable that was. We did nothing to provoke this. We’re so confused and, to be honest, still in shock.”

He continued: “We had to deal with the port authorities and the local police after the incident but all I wanted to really do for the rest of the holiday was lie in a darkened room. “

Though the pair’s holiday insurance helped with the couple’s hospital bills, it did not cover the expensive dental work that Tristan needed, nor the time off work that the shellshocked pair needed in the weeks following the incident.

The pair’s friend Daniel Wednesday Hillman set up a GoFundMe appeal after the incident, and so far friends and contributors have raised nearly £6,000.

Tristan said: “The massive outpouring of love and support has been tremendously healing for us. To see just how many people love and care about us has been staggering.

“I said to my cousin, Diandra, in despair the other day, ‘I don’t understand why people say ‘love always wins’ when hate wins, every time.’ I was wrong. So very wrong… Love wins.”

“Curiously, whenever I think about our assailants, the only thought that comes to my mind is not about punishment or retribution. But that I hope they can get some help.

“They will want to find us and they won’t be able to. Our wounds will heal and we have all the love in the world. But they will have to live with that for the rest of their lives.

“I also want to take this opportunity to say how immensely grateful we are to those of you who have contributed to our GoFundMe page. I can’t tell you how helpful that’s going to be for us over the coming months.”

Kelsea Little, spokesperson for GoFundMe said: “We are saddened to hear about this terrible attack on a loving couple. We wish Tristan and Vestal a swift recovery and we’re pleased to see their community coming together to support them.”

After the shootings at the pulse gay nightclub in Orlando, an appeal to support the victims became the fastest ever crowdfunding campaign to raise over $1m.