Home Gay Life Intersex and trans rights in the spotlight at PinkNews summer reception in... 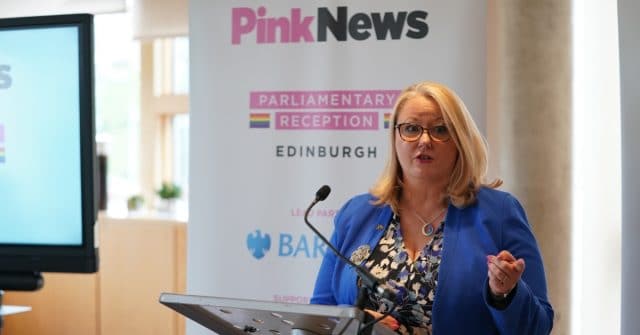 Christina McKelvie, Scottish Minister for Older People and Equalities, on Thursday (June 13) said the Scottish government’s focus for LGBT+ equality would be intersex rights and the intersectional experiences of LGBT+ people in Scotland.

The Scottish National Party (SNP) politician said that Scotland was one of the best countries in the world for LGBT+ rights at the PinkNews summer reception in Edinburgh, supported by Barclays and CYBG.

However, the MSP acknowledged that Scotland needed to keep pushing for full equality for LGBT+ people, saying: “We may have equality in law, but we still need equality in life.”

Gail Ross, MSP for Caithness, Sutherland and Ross, addressed equality in day-to-day life and said that Scotland must not legitimise anyone who would stop LGBT+ people living their lives as they want or feeling comfortable in their own skin.

“As legislators, we have a duty to make everyone’s lives easier,” said Ross. “History has taught us what happens when intolerance is left to fester and grow. I hold out my hand to a section of society who is fighting for their rights, because trans rights are human rights.”

Ross said: “If some women believe they are losing their sex-based rights, we have a lesson to learn,” and went on to say that we can combat these views with facts.

The proposedreform of the Gender Recognition Act (GRA) was focused on by Scottish Conservatives MSP Jamie Greene, who said: “One thing must prevail in the conversation about gender recognition: respect from everyone and by everyone. The tone of the debate must change, and it must change now.

“We need to right the wrongs against the trans community… Legislation is not worth the paper it is written on if we do not take public opinion with us.”

McKelvie stressed that the journeys of LGBT+ Scottish people were important contributors to equality in the country, as well as praising the efforts of the campaign Time for Inclusive Education (TIE).

TIE’s campaigning set the standard for the curricula in Scottish schools being inclusive of LGBT+ history, and led to Scotland becoming the first country in the world to implement inclusive education across all state schools.

McKelvie also announced the shortlist of nominees for the Public Sector Award at the PinkNews Awards later this year.