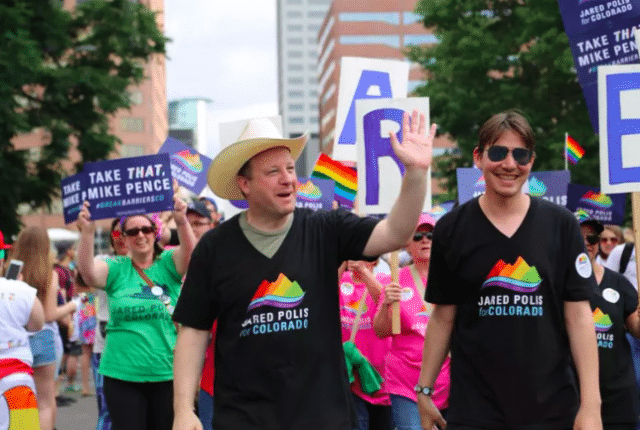 Polis became the first openly gay governor ever elected in the nation when he won his race last fall. During his ten years in Congress, he was a leader in the fight, including marriage equality and the repeal of Don’t Ask, Don’t Tell.

Polis shattered one of the lavender ceilings in politics. He proved that an openly gay man–with a long-term partner and two children–has the ability to win the highest office in a state that isn’t a slam-dunk for Democrats.

Polis did so by being himself, right down to his distinct lack of fashion sense.

Polis grew up the child of self-described hippies (minus the drugs) who started a business designing posters. Although his parents were married, Jared has his mother’s surname. At age eight, Jared was manning the family’s booth at card shows. The business eventually morphed into Blue Mountain Arts, a greeting card publisher.

With father Steve Schutz, Polis developed Blue Mountain into one of the first online greeting card companies, eventually selling it for $780 million. Polis then started an online florist company, which he later sold for $477 million. With his profits, Polis started an eponymous foundation focused on supporting teachers and promoting access to technology. (The foundation is now on hiatus while Polis serves as governor.)

Polis came out to his parents after graduating from Princeton. Even as counter-culture types, his parents were hardly immune to stereotypes about gay people. “All I knew was homosexuals were creepy molesting types. Susan and I figured it out together. We didn’t blame each other, it didn’t affect our relationship. We were 100 percent accepting of him. If I had reservations, I never expressed them to Jared.”

Today the couple are the proud parents of a gay son who is changing the face of American politics.

Polis is in the vanguard of LGBTQ politicians as someone who has always been out. He first ran for office in 2000, as a member of the state Board of Education. In 2008, he emerged victorious from a crowded field to become the Democratic nominee for a Congressional seat. He was elected that year and was re-elected four times, always by a comfortable margin. In Congress, Polis was a crusader for equality and his district backed him wholeheartedly.

Polis’s gubernatorial campaign was noteworthy for how matter of fact it was about its historical nature. Coloradans recognized that his election would be groundbreaking--and then moved on. The biggest issue seemed to be what to call Polis’ partner, Marlon Reis. (He’s refered to as the First Gentleman.)

The accomplishment was all the more significant given Colorado’s homophobic past. In 1992, voters passed a statewide ballot measure forbidding any discrimination protections for gays and lesbians. The measure, Amendment 2, was a major victory for the religious right, which has a substantial presence in Colorado Springs. It was finally struck down by the Supreme Court in 1996. In his majority opinion, Justice Anthony Kennedy said that “desire to harm a politically unpopular group cannot constitute a legitimate governmental interest.” 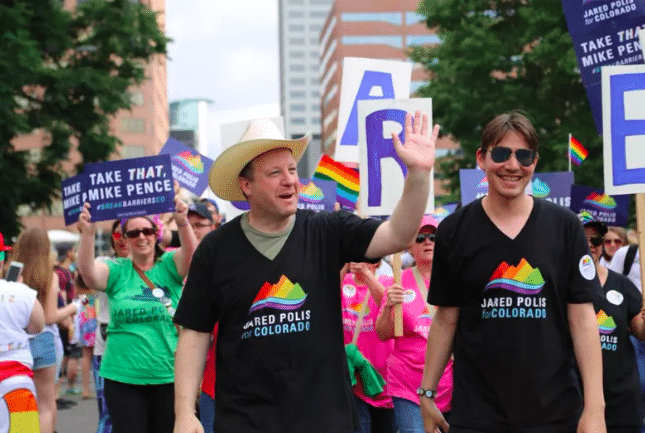 In his short time as governor, Polis has already made significant headway on his health care and education policy proposals. He’s also shown himself to be a much more pragmatic politician than his record in Congress would have suggested, much to the disappointment of a few progressives.

Polis has been regularly marching in Denver’s Pride parade for years. For this year’s pride, Polis is setting another first: He and Reis will be hosting a pride reception in the Governor’s mansion.