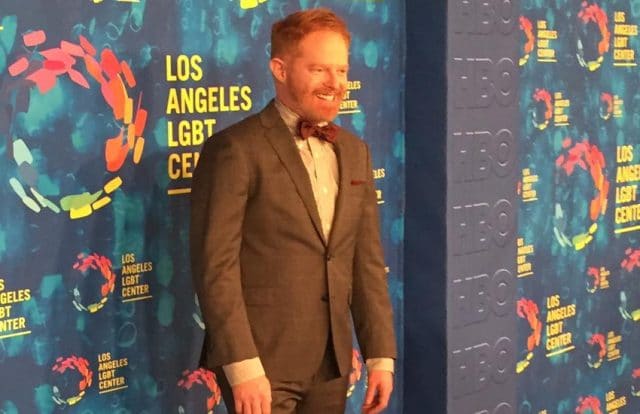 Ferguson’s husband Justin Mikitawill join him on the documentary. The project centers on the famed LGBTI bar while marking the 50th anniversary in the gay rights movement, the Hollywood Reporter said.

The Reporter said the project is in the nascent stages but would take advantage of New York City’s Pride festivities. In particular those connected to the Stonewall Inn and the June 1969 riots that led to the gay rights movement.

‘We are going to be on the frontlines at this year’s NYC gay pride which also happens to be World Pride and the 50th anniversary of Stonewall,’ said Ferguson, who is actively involved in gay rights with his charity, Tie the Knot, while Mikita is participating once again in charity affair AIDS/LifeCycle.

‘Our main focus is to fully take advantage of documenting that once in a lifetime event.’

‘So much of where the community is today is because of wheels set in motion 50 years ago — and yet in the day of dying retail and Grindr, it is getting harder and harder to keep queer spaces open,’ Ferguson told THR.

‘We decided together that we wanted to create a documentary for the younger generation — one that tells the importance of queer spaces for gathering both then and now, and why we have to work to preserve these spaces.

‘We hope that it will not only educate and enlighten but also inspire. We always need new leaders and who better to learn from that those who came before us.’

The documentary aims to use the events around the 1969 riots, and its upcoming 50th anniversary celebration, as a jumping-off point to tell the history of gay activism, the triumphs and tragedy in the ensuing decades, THR wrote.

Harvey Milk, AIDS, hate crimes, marriage equality and the fight for transgender rights will be touched upon. There will also be interviews with notable activists, artists and influencers from Stonewall, gay liberation and the generations that followed, THR reported.

The filmmakers also plan to use rare archival footage and photos, activist videos and home movies. This will be coupled with innovative animation, motion graphics and original music.

‘Every time there is a major event in the community, people go to the Stonewall to celebrate,’ said Schwarz. ‘It’s a place to gather, to celebrate, to mourn, to protest and to party.’

While the filmmakers are still putting the pieces together, the team will be ready for its first shoot later this month.