Home Gay Life Kellyanne Conway Accuses Pelosi Of Treating Her Like ‘Her Maid’ Or ‘Makeup... 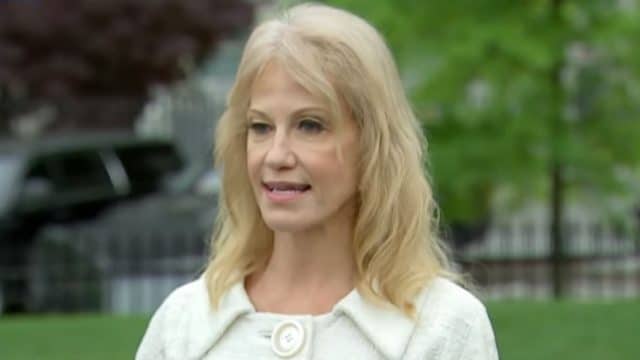 White House Counselor Kellyanne Conway escalated a feud with Nancy Pelosi (D-Calif.) on Thursday, accusing the House Speaker of treating her like “her maid” a day after President Trump threw a “temper tantrum” and stormed out of a meeting with Democratic congressional leaders.

After Trump’s abrupt departure from the meeting on Wednesday, Pelosi told the room that former Presidents Jefferson and Theodore Roosevelt worked with their opponents on infrastructure, but she was not surprised Trump did not follow their example.

“When she was finished I said, respectfully, ‘Madam Speaker, would you like to address some of the specifics the president talked about,’” Conway recounted in an interview on Fox News.

According to Conway, Pelosi shot back: “I don’t — I talk to the president, I don’t talk to staff.”

“Let’s face it, she is the sixth-most rich member of Congress, she treats everybody like they’re her staff,” she claimed. “She treats me like I’m either her maid, or her driver, or her pilot or her makeup artist and I’m not.” (Pelosi is the 30th-richest member of Congress, according to figures compiled by Roll Call in 2018.)

Conway then said she shot back: “I said to her, ‘How very pro-woman of you.’ Per usual, because she is not very pro-woman. She is pro some women, a few women.”

Pelosi refused to address the exchange during her weekly news conference Thursday.

“I’m not going to talk about her,” she told reporters. “I responded as the Speaker of the House to the president of the United States. Other conversations people want to have among themselves is up to them.”

Pelosi urged the president’s family and staff to conduct “an intervention” with Trump for the good of the country.

“Now this time, another temper tantrum,” Pelosi told reporters. “I pray for the president of the United States. I wish that his family or his administration or his staff would have an intervention for the good of the country.”